Forget wearing her heart on her sleeve: Jennifer Lopez carries her love for Ben Affleck around her neck because she was seen sporting a gold chain with his name on it.

As Taylor Swift once shouted, “Spelling is fun!” and for Jennifer Lopez, B-E-N spells “love.” J.Lo, 52, enjoyed a day of shopping in Monaco on Monday (July 26.) While out and about, the Shotgun Wedding star rocked a white dress, a wide-brimmed hat, some comfy-looking sandals, and a Valentino Garavani handbag. However, the accessory that really turned heads was the chain hanging around Jennifer’s neck because it had three charms spelling out Ben Affleck’s first name. 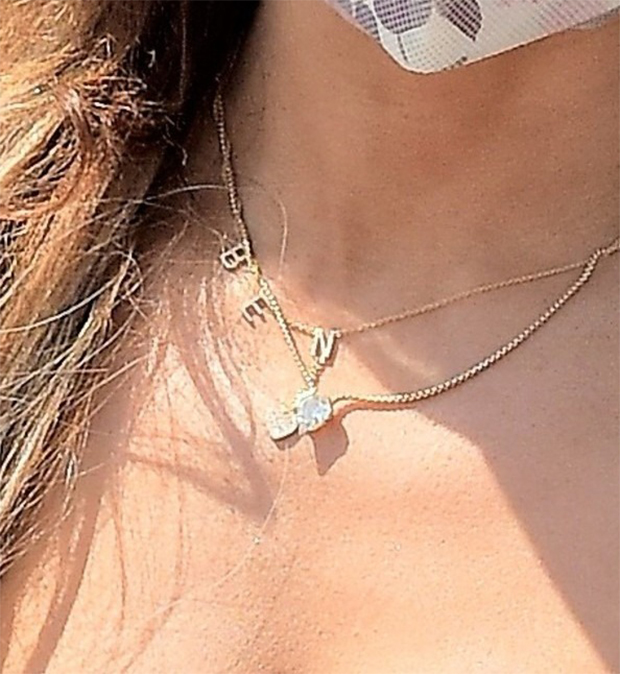 This necklace comes after a very busy birthday weekend for “Jenny From The Block.” Jennifer turned 52 on July 24, and she celebrated by making her rekindled romance with Ben, 48, Instagram official. “5 2…what it do,” Jennifer captioned her birthday Instagram gallery, first showing off her killer figure in a bikini and a yellow Dolce & Gabbana kimono as a cover-up in the first three photos. In photo number 4, she plants a huge kiss on Ben while wrapping his arms around her. “We are living for this,” wrote artist Sara Shakeel, echoing the feelings of all 8.19 million people who liked the photo.

If that kiss wasn’t the only thing worth “living” for, internet detectives uncovered another Bennifer tidbit from J.Lo’s birthday gallery. In one of the photos, a corner of a framed photo can be seen. Fans of J.Lo and Ben’s romance recognized it as an image from Ben’s March 2003 Vanity Fair cover. Inside the issue, famed photographer Annie Leibovitz also captured a few iconic Bennifer shots – including one where he’s riding a motorcycle with Jennifer tightly clinging to his back. The framed photo is part of the decor aboard the $130 million yacht that Jen and Ben are vacationing on in St. Tropez.

Bennifer’s PDA continued late into the night. During the party held in honor of Jennifer’s birthday, “Jenny From The Block” began to play over the sound system. In videos shared online, Ben and Jen snuggled in close while the song played. The Dogma actor famously starred in the song’s music video, which took a shot at the intense media attention their relationship received at the time.

In a case of “small world,” a day before Ben and Jen celebrated her birthday in St. Tropez, her ex-fiancé, Alex Rodriguez, was spotted soaking up some sun on a yacht in the French Riviera. Alex, 45, was photographed using an inflatable slide off the boat and was later photographed rinsing off in an outdoor shower. Later, A-Rod seemed to send some love to his ex by “liking” a birthday tribute posted by Jennifer’s sister.