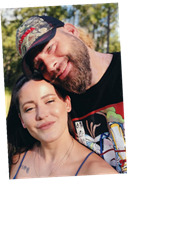 Earlier this week, Jenelle Evans announced that she had finally found a new job.

Along with other F-list celebs such as Deavan Clegg of 90 Day Fiance, Jenelle had been hired to take part in a podcast/lifestyle brand/weird, nebulous media collective thing with the unfortunate name of Girl Sh-t.

She seemed pretty excited about it, and she instructed her fans to follow the Girl Sh-t Instagram page, because that was where she would be “spending most of [her] time” going forward.

Then, on the very first freaking day of the project, Jenelle got fired.

Despite getting the boot, however, Evans decided to attend the launch party, where she was given the cold shoulder by the rest of the cast.

As The Ashley’s Reality Roundup points out, the whole situation has been extensively chronicled by 90 Day Fiance blogger John Yates.

“As we speak, [the rest of the cast is] at the kick-off party…” John said. “Once Jenelle was let go, she was asked not to attend. What does Jenelle do? She showed up.”

“Here’s where it gets fun,” he continued.

“If you saw Jenelle’s Instagram story, which she took down, where she was like, ‘Oh, at the party,’ in the car on the way back, like, ‘Girls are having fun. No one wanted to talk to me except you Gabbie.’

“That’s because she went to the party after they asked her not to go,” John said.

“They kicked Jenelle out. Jenelle got kicked the f–k out,” Yates hilariously added.

“The takeaway …is that Jenelle got fired, and it was led by Deavan and other members of the 18-people group. She tried to gate-crash the party.”

Yes, it seems that the party was being held in a bowling alley in Chattanooga, and Jenelle was allowed in the building, but barred from entering the VIP area where the party was taking place.

The people behind Girl Sh-t were very public about the fact that Jenelle had been canned — they even posted an announcement on their Instagram page — but hilariously, she continued to insist that she was still a part of the project.

In fact, she claimed that she couldn’t be fired, as she was the boss of the whole thing!

“Lmfao I’m the producer can’t fire me sorry,” Jenelle responded to one commenter who pointed out that she had very obviously been fired.

Eventually, however, the truth started to come out.

“Thought you were the one who created the Girl Sh-t stuff?” one follower wrote.

“lmfao I thought so too but apparently we need some time for everyone to figure out their roles,” Evans replied.

“You know the cancel culture s–t? That’s basically why,” Jenelle said in a since-deleted TikTok video posted that night.

“You guys enjoy yourself at the party. I hope you’re having a great time because you’re not even talking to each other!”

As more facts rolled in, we learned that Deavan appealed to the projects actual producers to fire Jenelle after she learned of the infamous incident in which David Eason slaughtered the family dog in front of his own kids.

It wasn’t long before Jenelle broke and posted an Instagram video (above) offering her side of the story.

“It’s pretty s–tty of a person to try to hold something against someone that happened years ago – like, we talk about all the time – to ruin their opportunities in life,” she said

“Like, that’s s–tty. That’s really s–tty. you know, I thought, you know, I chose a good group of a girls and sometimes things don’t work out they way it’s planned, that’s OK,” Evans continued.

Well, that’s certainly true — and it turns out you experience even more hiccups when you choose to stay with your animal- and child-abusing husband.

Jenelle might have been fired from Girl Sh-t — but it sounds like there’s still plenty of regular sh-t in her life!