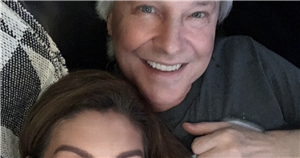 Jane McDonald has broken her silence on the death of her beloved fiancé Eddie Rothe, who died following a battle with lung cancer in March.

In an emotional Instagram post shared on Wednesday evening, the former Loose Women panellist expressed her gratitude to those who had donated to Wakefield Hospice in honour of Ed.

She wrote: "I would like to say a huge heartfelt Thank You to everyone who donated to the Wakefield Hospice Just Giving fund in Ed's memory. Your generosity has raised a total of £12,125.38!

"These funds will make a significant difference to the patients and their families at the hospice."

Alongside a picture of Wakefield Hospice's logo, the 58 year old added: "I would also like to say how touched I was at the kind and thoughtful messages left on the Just Giving page.

"You have all been wonderful! Love Jane x."

Jane announced the heartbreaking news that her partner Ed died in April.

She shared a picture of herself and Ed smiling for the camera alongside the caption: "It is with immense sadness that we share the news that Jane's beloved life partner, Ed, passed away on Friday 26th March.

"He had been battling lung cancer for the last few months. We would like to thank everyone for all their help and support during this very difficult time, especially the NHS staff and the wonderful team at The Wakefield Hospice."

The pair first dated as teenagers before reuniting almost 30 years later and announcing their engagement in 2008.

Casting her mind back to their early romance, Jane told The Mirror: "I couldn't believe it when the owner said the drummer had taken a fancy to me. I was startled. He was a gorgeous pop star, and I was a naive teenager from Yorkshire. But we went out for about 18 months."

Jane and Ed were brought together once more, by chance, while she was working on Loose Women, and Ed was doing an appearance nearby on This Morning in 2008. They immediately fell back in love again.