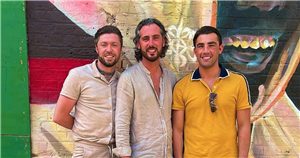 Jack Fincham has been seen enjoying a boozy lunch with friends after he was reportedly questioned by police this weekend.

Love Island star Jack, 30, appeared in good spirits despite reports he was detained by police in a car park in south east London at 5am on Sunday 11 July.

Following the recent claims, Jack shared snaps of himself having fun in the sun with some friends at Bluebird restaurant in Chelsea, London on Sunday 18 July.

One photograph sees Jack in a mustard yellow and navy blue polo shirt and a pair of navy blue shorts.

He smiles while standing next to two male friends, who are also grinning for the camera.

Jack, who recently split from Frankie Sims, shared the group image on his Instagram page and gushed over his mates in the caption.

He wrote: "Can always count on you two, love you boys and happy birthday @teeyard".

Meanwhile the reality star added more snaps from the get together, including another group selfie, which shows Jack smiling while sat amongst friends.

Jack also took the chance to show off his surroundings as he sat outside of the swanky Made in Chelsea favourite restaurant.

A snap shows one of Jack's feet as he crosses his legs while sat by a low table, laden with glasses and a bottle of wine.

It comes after onlookers reportedly spotted Jack acting suspiciously in a car park behind a set of semi-detached houses.

Jack was seen in a blue and white tracksuit as he was detained by police, in pictures obtained by The Mirror.

The reality star had reportedly been spotted by onlookers acting suspiciously in a car park behind a set of semi-detached houses.

It's understood four police officers spoke with the former stationery sales manager before his family arrived to take him home.

A Metropolitan Police spokesman told The Mirror: "Police were called at 5.18am to reports of a man acting suspiciously. Officers attended and detained a man. No offences had been committed. He was collected by his family."

Jack had been dating The Only Way Is Essex babe Frankie Sims, but the pair recently parted ways after a string of arguments.

A source told OK! earlier this month: "Jack and Frankie have split.

"They’ve had a couple of rows and have unfollowed each other on Instagram."

Frankie has since jetted off to Ibiza with her sister Demi Sims and friends.

After landing in the sun soaked Balearic island, Frankie shared a steamy snap of herself in a tiny blue outfit on her Instagram page.

As she shared the gorgeous photo, Frankie declared in the caption: "Hot girl summer ~ IBIZA ~ let’s hav ya" next to a string of blue heart emojis.

For all the latest on Jack Fincham and much more celebrity news, sign up to OK!'s daily newsletter