Meghan McCain bid adieu to “The View” in August after butting heads with her co-hosts for almost four years. Now, she’s embarking on the next chapter in her career, and her new role is quite different from her former gig.

Meghan, whose father is late Arizona Senator John McCain, joined “The View” in October 2017 for the daytime talk show’s 21st season. She became the panel’s conservative voice, replacing Fox News contributor Jedediah Bila. The outspoken maverick upstart was more than ready to take on her more liberal adversaries and told ABC News that her goal was to “be the Jane Goodall of red America.” She also expressed hope that potential conservative guests like former president Donald Trump would “feel a little safer” with her on the show. She never did get the chance to confront the man who said that her father was “not a war hero,” but she was able to grill Donald Trump Jr. over his dad’s behavior.

When Meghan announced that she was leaving “The View,” she received a rare compliment from one co-host she often clashed with, Joy Behar. “I have really, really appreciated the fact that you were a formidable opponent in many ways and that you spoke your mind,” Behar said, per The Associated Press. “You’re no snowflake, missy.” So will McCain’s new job allow her to be just as opinionated and combative? Read on to find out.

Meghan McCain won't be arguing with anyone anymore at work

Discussions of hot topics often got heated on “The View,” but now Meghan McCain will be able to share her opinions without any pushback from co-hosts who disagree with her. And if she doesn’t want to deal with any criticism, all she has to do is avoid reading the comments section. Why? She’s joining the DailyMail.com team as a columnist, which also means that Twitter users will no longer be able to snark about McCain having a hairstylist who possibly hates her.

The news of McCain’s new gig was shared by the U.K.-based publication, which teased that readers can expect her first piece sometime during “the week of September 20.” McCain will work in Washington, D.C., and it seems like a lot of her writing is going to be political in nature. “I’m looking forward to sharing my own opinions without fear or favor on the important issues that matter to our readers across the globe,” read a statement from McCain. On Twitter, she wrote that she’s “excited to work in a completely uncensored free space.” The very opinionated Piers Morgan is one of her co-workers.

This won’t be McCain’s first writing gig. She created a blog during her father’s presidential campaign, and she’s written for The Daily Beast and Newsweek. The Columbia University graduate also penned a memoir titled “Dirty Sexy Politics” and the children’s book “My Dad, John McCain.” In October, she’s releasing a memoir titled “Bad Republican.”

Why Meghan McCain left 'The View' 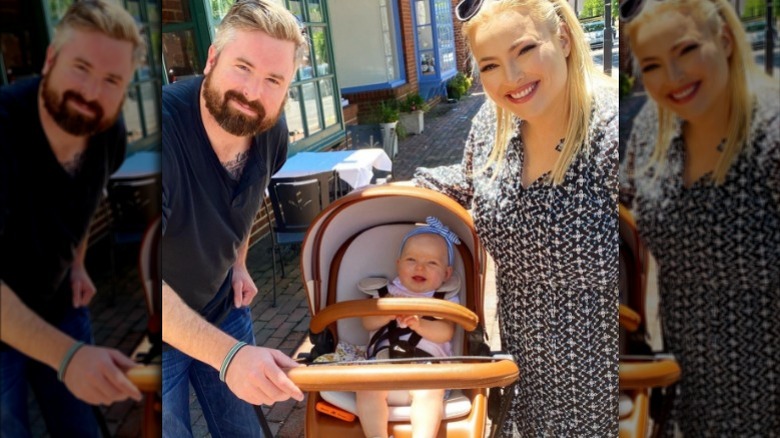 Meghan McCain’s final days on “The View” were pretty wild. She was criticized for attacking Kathy Griffin after the comedian was diagnosed with lung cancer, and Mary Trump called her a “coward” for sitting out the episode of the show that she appeared on. “She’s afraid of people who are not only willing but able to call her out,” Trump told The Daily Beast in August. While this will likely no longer be a problem at her new place of work, McCain’s decision to leave “The View” didn’t have anything to do with the show’s often contentious work environment.

According to People, McCain and her husband, Federalist publisher Ben Domenech, were residing near Washington, D.C. when they welcomed their daughter, Liberty Sage McCain Domenech, last September. Due to the pandemic, McCain and her co-hosts were filming “The View” remotely. However, the show will return to its New York studio for Season 25, and McCain decided that she doesn’t want to go back to the big city. “I think as any new mom knows, when I think about where I want Liberty to have her first steps and her first words, I just have this really wonderful life here that ultimately I felt like ultimately I didn’t want to leave,” she said when she announced that was leaving. She shared that it was a tough decision, but we’re sure she will be happy back in D.C. with her beloved family.