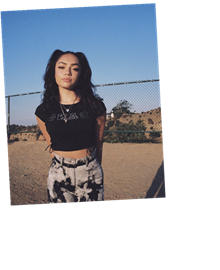 By now, you’ve definitely accepted the fact that TikTokers are taking over the world one viral dance at a time—or in Avani Gregg’s case, with wildly intricate makeup looks. You might have first met her as “clown girl” on the Tok but since then, she’s r-e-a-l-l-y taken off. Nowadays she has own series on Facebook called Here for It *and* a beauty line on the way. To review, she started making seconds-long videos, and now she’s earning Big Tech money. Don’t mind me, I’ll just be here rethinking the past 10 years of life. 😅

While you digest this information and wonder why you didn’t work harder to be an internet sensation while you were in the prime of your youth, let me share with you all the things you need to know about Miss Avani—including her humble Indiana beginnings, her journey to the Olympics, her love life, and her longterm goals.

Her birthday is on November 23, which makes her a Sagittarius!

Avani went up to level 10 in gymnastics (which is pretty close to ~Olympic-level~, FYI), but she had to quit because of back problems.

She has two sisters—Shanti is older and Priya is younger.

She’s from the Midwest

Indiana is her home state!

One of her sisters is Insta famous.

Her older sister, Shanti, is a social media influencer with over ninety-six thousand followers on IG.

Makeup is one of her passions

Avani has been playing around with makeup since she was about four or five year old. She’s really freakin’ good at it!!

She got famous thanks to her clown makeup skills

Avani did transition videos where she had a bare face and then transformed into a literal clown. The TikToks were so creative that fans dubbed her “Clown Girl” and she even popularized the hashtag #ClownCheck. Avani didn’t love the nickname—she told HollyWire that she thought it was “not really a good thing to be known for,” but she’s cool with the fact that it helped launch her social media career.

To make it happen, she took summer school classes—which I can imagine must’ve been hard to balance while also being a celebrity and whatnot. But hey, the girl can’t be stopped!

Anthony Reeves is her boyfriend

Yup, her and the Sway boi have been romantically linked since last year. They made things *official* in early 2020.

At the 12th annual Shorty Awards, Avani won the TikToker of the Year award. That’s when you know you’ve made it!

Recently, Avani launched her own show

In Here for It with Avani Gregg, the content creator dives into all the social issues that Gen Z has to deal with and brings on some familiar faces from the TikTok universe. The series lives on Facebook’s new feature, Watch Together.

She’s a member of the Hype House

Avani has been a part of this house since day one. Although she doesn’t live in the mansion, she frequently films there with other TikTokers.

A makeup line is in the works

She confirmed in an interview with Elite Daily that she is currently in the process of creating her own makeup line. Clearly I wasn’t working hard enough when I was 18…

Her mom moved to Los Angeles with her

At the beginning of 2020, Avani and her mom packed up their bags and got an apartment in L.A. to pursue Avani’s social media career while her dad and sisters stayed in Indiana. Now, that’s support, y’all!!!

But then the rest of her family ended up moving too

She stars in a popular series

Avani plays Gemma in the web show Chicken Girls on Brat TV with other influencers like Hayley LeBlanc, Mads Lewis, and Baby Ariel. You can watch it for free on YouTube!

Are y’all really even BFFS if you don’t celebrate the anniversary of your best friendship??? Side note: How precious are these two?

The Lion King is one of her least favorite Disney movies

Billie Eilish is one of her favorite celebrities

If she could do any famous person’s makeup, it’d be Billie. Oh, and in case Billie is reading this RN, Avani would also love a Cameo shout-out from you.

She wants to be more than a social media influencer

In the future, she sees herself doing more acting, and maybe even going to school for entertainment law. Such a driven queen!!