On June 28, Madison LeCroy and her friend Kat Velasco went live on Instagram after attending a daytime pool party at the Wonderer in Charleston, South Carolina, per the Daily Mail. The “Southern Charm” star, who recently made headlines due to rumors she had some kind of dalliance with Alex Rodriguez while he was still with J.Lo, and her friend had taken the party back home as they drank white wine and danced around the living room. The Charleston-based hairdresser hopped on the shoulders of her friend, while they sang Taylor Swift’s “We Are Never Ever Getting Back Together” — a striking similarity to the time Kristin Cavallari climbed on the shoulders of Madison’s ex, Austen Kroll, a video set to Taylor Swift’s “Mean.” At one point, Madison mentioned that Austen had called, per Us Weekly, but no more details were given, leaving fans curious about the status of their relationship. In the drunken escapades, Madison accidentally flashed the camera multiple times as she danced around and maneuvered her way on and off her friend’s shoulder.

Many users commented on the ladies’ shenanigans as they unfolded, according to the Daily Mail, including some wondering about Madison and Austen, others saying she was soon going to “regret” the livestream, and one condemning her behavior.

So, how did the reality star feel about exposing herself to thousands of live viewers? Read on to find out.

Madison LeCroy feels 'awful' and 'embarrassed,' but defends herself 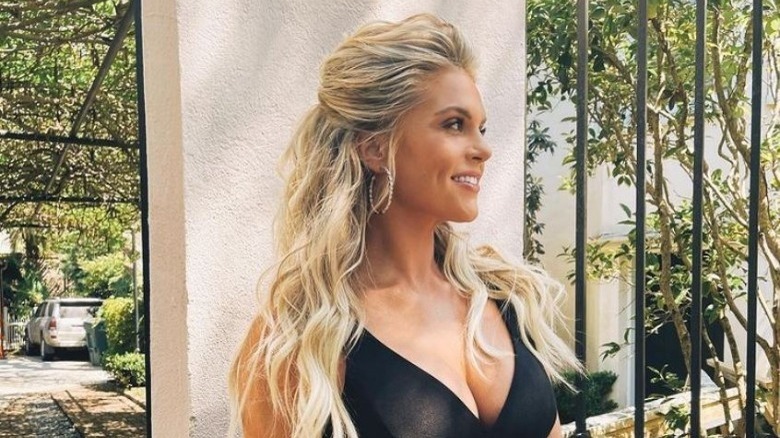 Madison LeCroy took to her Instagram stories the morning after to reveal her regret. “Yes, I feel awful, embarrassed, drunk still,” she told her 521,000 Instagram followers, per the Daily Mail. “Last night was not my best and I had a good time, like clearly. I just noticed that my boobs were out all over the internet.” The Bravo star’s remorse seemed to end there, as she used the remainder of her time on her Instagram story to defend herself.

“But hey,” Madison continued as she lifted up her sweatshirt to reveal a blue sports bra. “Is that the first time you’ve ever seen some t*ts before? Like give me a break y’all. I got drunk, I got sloppy, like forget about it. Why are you so worried? It’s my life.”

As she continued, she grew more passionate in defense of her actions. “See this?” Madison said as she pointed up toward her Instagram handle. “It says Madison LeCroy, my f***king page, I do what I wanna do. Worry about yourself.”

Maybe next time Madison goes live, her new boyfriend will make an appearance! One can only hope.