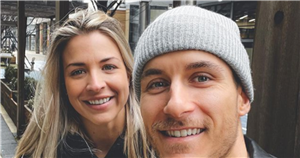 They are known for being utterly devoted to one another.

But there are some things that Gorka Marquez and his doting fiancé Gemma Atkinson can't agree on.

As the happy couple tuned in for the important Italy v Spain match on Tuesday, Strictly dancer Gorka, 30, was left heartbroken after his national team was kicked out of the Euro 2020 competition.

Hoping to lighten the mood, the former Emmerdale actress poked fun at her husband-to-be as he climbed into bed after a devastating match.

Feeling in a mischievous mood, Gemma, 36, reached out to her 1.6 million followers online to see whether they would like to see her wind up her future hubby.

As the pair snuggled up together in bed, the former soap star filmed Gorka's reaction as she caught his attention and she whispered “it’s coming home” from behind the camera.

And it is clear to see he was unimpressed with her sneaky remark as he shot her a disgruntled expression while he mumbled something under his breath.

She captioned the post: “Proper snide” with a cry laughing face as she revelled in his nation’s downfall.

Earlier that afternoon, the former Emmerdale actress , who recently shared her new Love Island inspired garden, filmed her patriotic partner as he got into the festive spirit and he donned his red national football shirt in support of his team.

Despite his devastating loss, England are just inches away from reaching the finals as the Three Lions prepare for their upcoming match against Denmark on July 7.

This will be the first major final the team will have reached since their one and only win against Germany in 1966.

The happy couple, who announced their engagement on Valentine’s Day, will be watching the all-important match on Wednesday and after her painful stunt on Tuesday, it is clear to see that the bride-to-be has all her fingers crossed ahead of the big game.

The pair, who have been together for more than three years first started their relationship in 2018 just months after they met on Strictly Come Dancing in 2017.

They went on to welcome their first child together in July 2019 and proved how serious they are about each other after Gorka got down on one knee during a staycation in County Durham earlier this year.