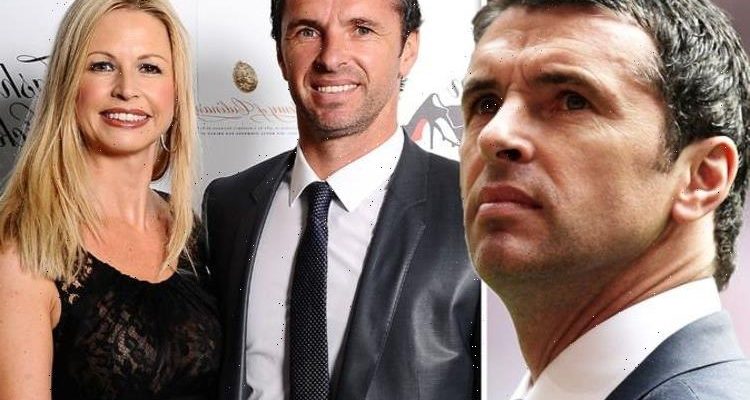 Gary Speed’s widow Louise has tied the knot with her property developer fiancé, 10 years after her late husband took his own life. Last week saw the mother-of-two, 51, marry businessman Quinton Bird, 52, in a romantic ceremony. Louise has been working with the divorced father-of-three for the past six years on their building and renovation company, Bow Property Development.

I have learned that life can be good again

The wife of the late football manager previously told how Bird helped her cope with loneliness in the wake of Speed’s death.

Last week, the couple finally married in a lavish ceremony at Peckford Castle in Cheshire.

In a series of snaps from the big day, a radiant looking Louise could be seen grinning ecstatically while clutching a bouquet of short-stemmed white roses.

With her blonde hair immaculately curled around her shoulders, the bride stunned in an ornate white gown.

Featuring elegant floral lace detail from bust to hem, Louise was forced to hold up her long train to stop the fabric from dragging on the floor.

In another picture, she could be seen smiling as her and Bird said their vows while her veil draped elegantly down her back.

Candles in glass votives and white rose petals decorated the traditional venue, while a large flower arch could be seen adorning the entrance behind the couple.

Gary’s close friend Alan Shearer was in attendance, who he played with at Newcastle United.

Guests were kept entertained by magicians doing illusions and after the ceremony tucked into a £900 cake.

Speaking last month to mark the 10 year anniversary of her late husband’s death, Louise spoke about dealing with her emotions in the aftermath of the devastating incident.

She said: “It was like being in the worst nightmare possible.

“There were no answers and no Gary walking through the door again.”

She added that she felt like “nothing was ever going to be right again”.

Louise went on: “I was trudging through life, just functioning.”

The mother-of-two went on to say that the 10 years since her late husband’s death has helped to heal her pain.

“I have learned that life can be good again, can be great again,” she told MailOnline.

Speed was discovered at his £2million home in Huntington in Chester, less than 24 hours after an appearance on BBC1’s Football Focus in November 2011.

He left behind his wife and their two sons, Tommy and Ed.

If you need support or advice, you can contact the Samaritans helpline by calling 116 123.

The helpline is free and open 24 hours a day every day of the year. You can also contact Samaritans by emailing [email protected]