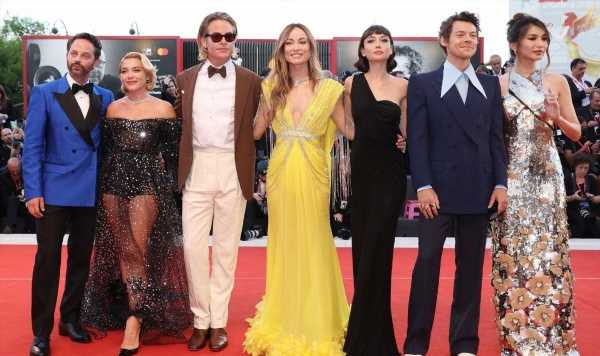 A two-year-long timeline of rumours, alleged feuds, and leaked emails are plaguing Olivia Wilde’s latest film. Don’t Worry Darling promises to be an “American psychological thriller” with Pugh and Styles playing a seemingly perfect couple living in California, before cracks in their utopian life begin to emerge.

But production has been plagued with internet rumours, with the drama seemingly coming to a head at the film’s international premiere in Venice last week. Vogue titled the event “a psychological thriller all its own” with stories of love triangles, feuds and cast members spitting on one another.

Don’t Worry Darling is Olivia Wilde’s second film as a director after an extensive career on the other side of the camera.

With a legacy to uphold thanks to her 2019 hit film Booksmart, many had great expectations for Don’t Worry Darling, and as the cast list was released it became apparent just how star-studded the film would be. However, the saga surrounding this film and its stars begins here, with the dispute over why the leading actor was changed.

Emmy Award winner Shia LeBeouf, 36,  was originally cast as leading man Jack Chambers, but he departed the set shortly after being cast and the reasons as to why have been widely disputed.

In an apparent swipe at LaBeouf, Wilde told Variety that LaBeouf had been fired out of respect for leading lady Pugh, as he “was not conducive to the ethos that I demand of my productions”.

She said his acting process was “combative” and she’d made the executive decision to remove him from set in order to create a “safe, trusting environment” for the rest of the cast and crew.

However, after her comments were published, the actor went to the same outlet and declared Wilde’s statements were “not the truth”, sharing two emails which he allegedly sent to Wilde.

One email explained that while he appreciated some kind words she had shared in the article about his work, he was “a little confused about the narrative that I was fired”.

It read: “I quit your film because your actors and I couldn’t find time to rehearse. Firing me never took place, Olivia. And while I fully understand the attractiveness of pushing that story because of the current social landscape and the social currency that brings. It is not the truth.”

LaBeouf also shared a video of Wilde allegedly asking him to return to the production two days after he quit. The video hinted at an entirely different scandal plaguing the film set – a rift between Pugh and Wilde.

In the video, Wilde said: “You know, I think this might be a bit of a wake-up call for Miss Flo (apparently referring to Pugh), and I want to know if you’re open to giving this a shot with me, with us.” 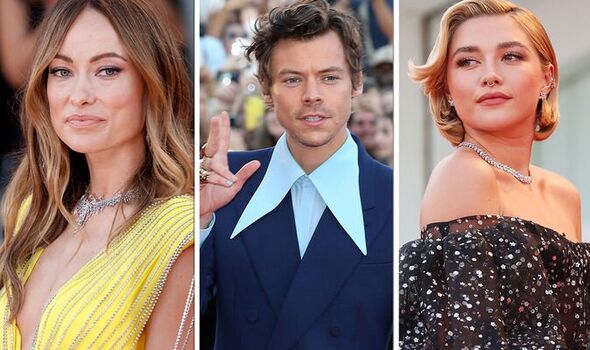 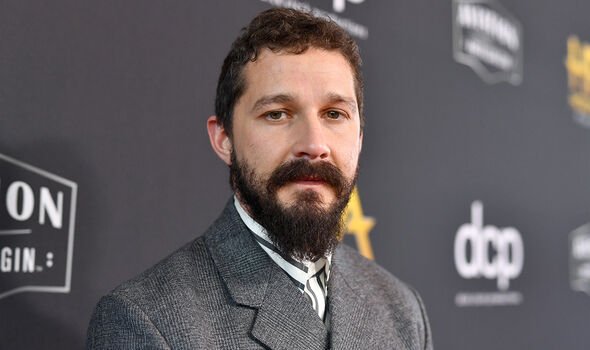 Arguably, the element of the story generating the most gossip has been that of Florence Pugh’s apparent distaste for the film and its leadership.

Fans of the 26-year-old actress have highlighted that while she is usually visibly proud of her projects on social media, her promotion of Don’t Worry Darling has been vastly underwhelming.

One thing Pugh has been outspoken about is her dislike for how the film was marketed.

The trailer for Don’t Worry Darling captured global attention, especially in Styles’ fanbase, as it showcased some heated scenes between the singer and Pugh.

Pugh desperately tried to distance herself from the sexual online discourse that followed, telling Harper’s Bazaar: “It’s not why I’m in the industry. When it’s reduced to your sex scenes, or to watch the most famous man in the world go down on someone, it’s not why we do it.”

Wilde seemingly has a different mindset on the matter and has been outspoken about her promotion of female pleasure in the film, telling Variety: “Men don’t come in this film. Only women here! In hetero sex scenes in film, the focus on men as the recipients of pleasure is almost ubiquitous.”

Adding fuel to the fire of internet rumours, Pugh did not attend the press conference for the film in Venice, only appearing on the red carpet, allegedly due to a scheduling conflict – she in Budapest filimng the Dune sequel and her flight to Venice only landed after the conference.

A reporter questioned Wilde at the conference about the alleged rift, to which she responded: “The internet feeds itself. I don’t need to contribute, I think it’s significantly well-nourished.”

She added: “Florence is a force and we are so grateful that she is able to make it tonight,” Wilde said. “I know as a director how disruptive it is to lose an actor even for a day.”

But following the red carpet, Pugh’s stylist Rebecca Corbin-Murray seemingly jumped into the fray as she posted an Instagram photo of the actress’ stunning outfit with the caption “Ms Flo” – which of course, the internet immediately jumped on as a dig at Wilde for her leaked comments to Shia Labeouf.

And then Wilde’s stylist, Karla Welch, also added fuel to the fire with an ambiguous Instagram story stating: “There’s always more to the story…” 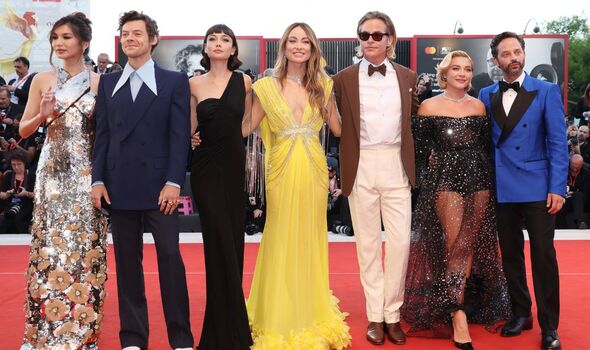 Wilde’s relationship with Harry Styles, who replaced LaBeouf as Jack Chambers, has also been pulled into the ring of public scrutiny following their distant appearance at the premiere.

The pair first met on the set of Don’t Worry Darling when Style in late 2020, with Wilde, 48, telling People in November she “did a little victory dance” when she found out the 28-year-old would be her leading lad.

However, that same month it was revealed that Wilde had split from her long-time fiance Jason Sudeikis. The couple had started dating in 2011 and got engaged in 2013 – they were never married, but did have two children together, Otis and Daisy.

A source reportedly explained to Entertainment Tonight that the couple simply “fell out of love” and that there was simply no “juicy story” behind it.

Wilde was publicly served custody papers from the Horrible Bosses actor as she took to the stage of CinemaCon in Las Vegas in what she called “a huge breach in security”. Sudeikis claimed he was unaware that this would happen, stating he “would never condone her being served in such an inappropriate manner”. 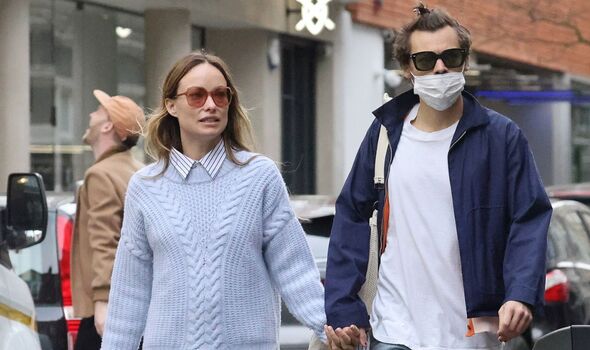 Then, in early 2021, photographs of Wilde and Styles holding hands at a wedding they attended and the internet exploded with rumours about the extent of their relationship.

The pair had reportedly become close on the set of Don’t Worry Darling, although a source speaking to Us Weekly insisted “Harry did not break up an engagement”.

Both Styles and Wilde have been relatively subtle about their relationship since, as the director explained to Variety: “I’m not going to say anything about it because I’ve never seen a relationship benefit from being dragged into the public arena.”

Then, at last week’s Venice International Film Festival, both stars attended the premiere and press conference but startled fans as they seemingly avoided each other. While this sparked rumours of a breakup, or that the relationship was to benefit the film’s publicity, Harper’s Bazaar claimed it was an effort “to keep attention on the film rather than their relationship”.

This brings us to perhaps the strangest piece of this puzzle: Spitgate. 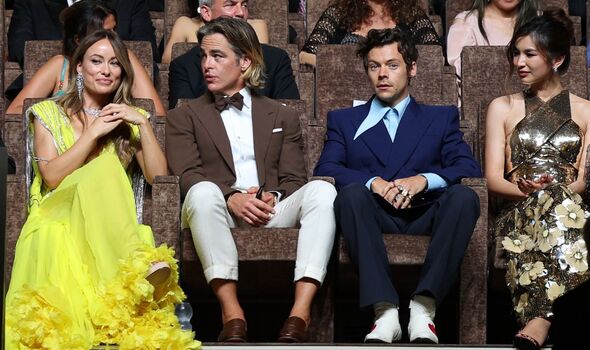 Chris Pine, the 42-year-old actor who plays Styles’ boss in Don’t Worry Darling,  sat in between Styles and Wilde at the premiere (as they remained tactfully apart).

A video clip which has now become an internet sensation and sparked a thousand memes,

Wilde and Pine are seen already seated, and the crowd applauds as Styles made his way to sit next to Pine.

What happens next is anyone’s guess: some say Harry spits on Pine’s lap. Others say Pine had just realised his glasses were there. Whatever happened, the internet rumour mill has not let it go quietly.

In response, Pine’s representative told E! News that this claim is “a completely fabricated exchange” but that hasn’t slumped the clip’s virality.

Styles also addressed the clip while on stage at his Love on Tour show in New York on September 7, saying with a laugh: “I just popped very quickly to Venice to spit on Chris Pine.”

Pine was also noted for other strange moments during the festival, as fans noticed him losing concentration at various points, most notably during an interview alongside Styles.

In the press junket interview at the premiere with Fred Film Radio, Styles commented: “My favourite thing about the movie is it feels like a movie.” Hearing this comment, Pine sat almost entirely motionless staring into the distance, and fans on social media have taken full creative control of the moment.

One Twitter user cropped a close-up image of Pine’s face while he was listening to Styles, captioning it: “He is reconsidering all his life choices here…literally dissociating from his surroundings.”

Another Twitter fan shared the meme image saying: “You can almost see the screams catching in his throat…”

Don’t Worry Darling is released in cinemas on September 23.