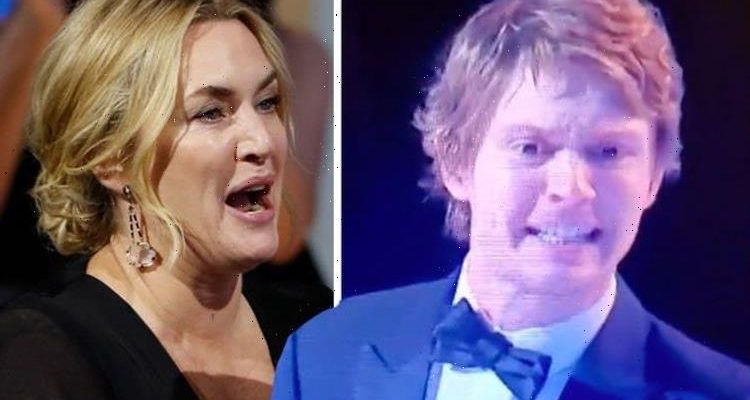 Evan Peters lost his cool when he went up on stage to collect his first ever Emmy Award for Best Supporting Actor in a Limited Series or Movie. The actor, who shot to fame in American Horror Story, was nominated for the gong for his portrayal as Detective Colin Zabel in Mare of Easttown, alongside Kate Winslet.

Taking to the stage to accept the award, the first few comments of his speech were bleeped out.

The actor then promptly thanked his parents for getting him to LA and promised them a drink before showing gratitude to the rest of the cast and crew.

And while praising his colleagues, he wanted to do a very special shout-out (pardon the pun) to Kate.

He vehemently thanked the actress for just being her, screaming down the microphone as he did so.

Following his loving yet funny tribute to the legendary film star, fans rushed to Twitter to react.

A second added: “Kate Winslet getting a shout out from Evan Peters made my day!”

A third stated: “‘Thank you Kate Winslet for being KATE WINSLET!!’ is a line that should be included in every acceptance speech moving forward.”

While a fifth giggled: “Kate Winslet being yelled at by Evan Peters was the highlight of tonight #Emmys2021.”

Kate was honoured by another one of her co-stars during the 73rd ceremony, while graciously applauding her colleagues for their big wins on Sunday night.

She was seen on camera giving Julianne Nicholson a pep talk before she headed up on stage to collect her gong.

“Turns out, you’re good at caring for a whole production.

“You led all of us every step of the way with such care and intelligence and love.”

She went on: “If you hadn’t called and asked if I wanted to join you in Philly, I probably would have read the first two episodes, thought ‘Nah, the priest did it,’ and stayed home.