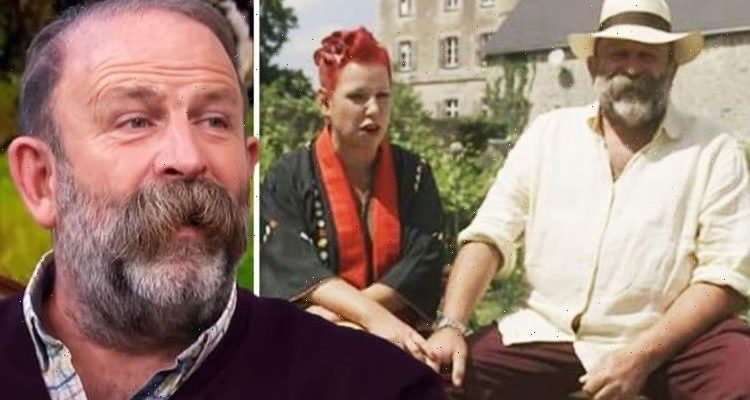 Dick Strawbridge tells Angel ‘don’t even think about it’

Escape To The Chateau’s Dick Strawbridge, 61, has taken to Twitter to express his “surprise” after making a discovery in the grounds of his Mayenne-based home. The TV star, who moved into Château de la Motte-Husson in 2015 along with wife Angel Adoree, 43, said that he had spotted a heron swimming on the moat of his chateau for the first time since moving to the property six years ago, while taking to social media to ask fans for their experiences with the bird.

Have I not been observant?

In view of his 82,800 Twitter followers, the father-of-three revealed his surprise discovery.

He wrote: “For the very first time ever I saw a heron swimming on the moat!?”

The star went on to reveal that it was the first time he had spotted the bird swimming and went on to ask his fans about the situation.

“I’ve seen them most days but never swimming. Is anyone else surprised or have I not been observant? ” he asked.

Dick signed off: “Tried to get a picture but it flew away. I knew herons can swim as I’ve seen one step off a rock in deep water!”

Followers of the star took to comments to relay their own experiences with the bird.

One wrote: “In more Heron related news not all Heron species swim I found out today, The Great Blue Heron, which is common in France and UK does swim occasionally to cross bodies of water but can not hunt from a swimming position.”

Tagging the star, one social media user advice: “That is extremely rare to witness. Herons do swim but very, very seldom.

“I have been photographing and observing herons for years and have never seen one swim.,” they confessed.

A fan of the DIY property show revealed that they too had a surprising experience with the bird.

They wrote: “Recently, for the first time ever, I saw a heron land in a tree!”

As another Twitter user penned: “Dick, every day is a school day living in France.”

In the latest episode of their show Make Do and Mend, Dick raised eyebrows amongst fans after he was seen adding fish into the same pond his tadpoles were in.

At the start of the show, Dick was seen taking on the task, which sparked concerns.

He told fans he had decided to make a wildlife pond, as his children were seen releasing their “first inhabitants” into the water.

One viewer rushed to Twitter to query the television personality on his decision.

They wrote: “@dickstrawbridge you put fish in your pond? Won’t they eat all the tadpoles?”

Ensuring all was fine, he replied: “The koi don’t have access to all the pond.”

Other viewers flocked to the post to admit they were also worried about the tadpoles.

“I’m relieved about that, as I was thinking the same,” a second added.