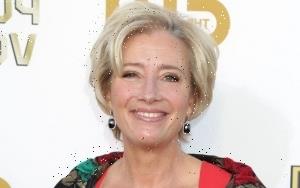 The ‘Nanny McPhee’ actress reveals that she ‘basically played a series of good women’ as she once was told that she didn’t have ‘the right kind of body’ for sex scenes.

AceShowbiz –Emma Thompson has claimed that she has been body shamed for years. The “Nanny McPhee” actress was told she didn’t have “the right kind of body” for sex scenes.

The 63-year-old actress revealed she has rarely been asked to do racy scenes in movies because male executives did not think she had the right look for them. Speaking to The Times newspaper, she said, “I’ve never really been offered sex scenes. As my mother said, I’ve basically played a series of ‘good’ women. I do ‘cerebral.’ And I have also never conformed to the shape or look of someone they might want to see naked.”

“And by ‘they,’ I mean male executives. I’m too mouthy, not pretty enough, not the right kind of body. And, crikey, you are constantly told what kind of body you have,” Emma added. And she said constant body shaming has upset her over the years. She explained, “In one interview I did, the male journalist wrote that I’d put on a lot of weight since I appeared in ‘Fortunes of War‘, and that my legs were ‘now like tree trunks,’ and that I’d ‘let myself down.’ I was 31 and, quite frankly, no longer starving myself. I don’t think anyone knows quite how thin most actresses are in real life. They look quite… unreal.”

Emma stars in her new movie “Good Luck to You, Leo Grande“, in which she appears naked on screen for one of the first times ever. Speaking previously about rehearsals, she revealed that she, co-star Daryl McCormack and director Sophie Hyde all stripped off to work on the racy scenes.

She told Entertainment Weekly, “Sophie, Daryl, and I rehearsed entirely nude.” She added, “And talked about our bodies, talked about our relationship with our bodies, drew them, discussed the things that we find difficult about, things we like about them, described one another’s bodies.”