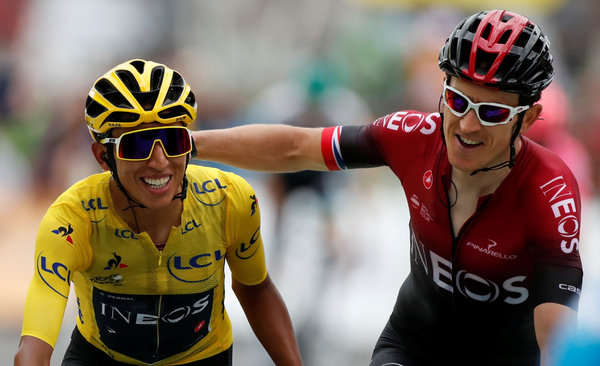 VAL THORENS, France — Egan Bernal kept the yellow jersey Saturday after the last Alpine stage and is all but guaranteed to win the Tour de France.

Barring a crash or a last-minute health issue, Bernal will become the first Colombian to win cycling’s biggest race when the Tour ends on Paris’s Champs-Élysées with a largely processional stage on Sunday.

At 22, Bernal will also become the youngest post-World War II winner of the Tour.

Bernal’s teammate and defending champion Geraint Thomas, lagging 1 minute 11 seconds behind over all, should finish as runner-up to give the Ineos team a 1-2 finish.

Vincenzo Nibali, the 2014 Tour champion, won Stage 20 to Val Thorens, which had been shortened to just 59 kilometers (36 miles) because of landslide on the route.

Featuring a 33-kilometer climb up to the ski station, the stage was too difficult for the Frenchman Julian Alaphilippe, who cracked after starting the day in second place and allowed Steven Kruijswijk to secure a third-place finish.

A cycling star in the making, Bernal took the race lead Friday when Stage 19 was dramatically cut short by a landslide across the route to the Alpine ski station of Tignes and by a violent hailstorm that made road conditions too icy for riders racing on two wheels barely wider than their thumbs.

He’d flown away from Alaphilippe, the punchy rider who did more than anyone to make this Tour the most exciting in decades and held the race lead for 14 days, on a superdifficult climb to the highest mountain pass of this race, the Iseran at 2,770 meters (9,090 feet) above sea level.

When the stage was then stopped with Bernal racing away on the downhill, organizers decided the riders’ timings to the top of the Iseran climb would be used to determine the overall standings. And that put Bernal in yellow and on a course to a victory.

If he wins, Bernal will achieve a feat unmatched by the Tour’s greatest champions — the five-time winners Eddy Merckx, Jacques Anquetil, Bernard Hinault and Miguel Indurain — who were all older when they first won.

Bernal has also proved stronger than Thomas, who threw his weight behind the Colombian heading into the penultimate stage. Bernal and Thomas crossed together in Val Thorens, with the Welshman warmly congratulating his successor with an accolade.

Unlike Bradley Wiggins, the four-time champion Chris Froome and Thomas, the three other riders who won the Tour for the British outfit Ineos, Bernal is not a time trial specialist. He built his success on consistent performances in the mountains after losing ground in the race against the clock last week in the southwestern town of Pau.

Perpetuating the tradition of the great Colombian climbers, he thrived in high altitude, and it was fitting that he delivered his fatal blow to his rivals in the Iseran.

On the road to Val Thorens, he shook hands with Alaphilippe, who left his mark on the race with his unpredictable attacks and strategies. Throughout the race, Alaphilippe forced the teams of favorites to rethink their strategies as they tried to topple the Frenchman.