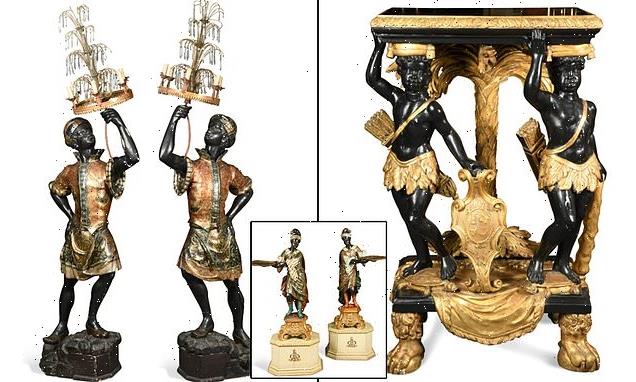 Princess Michael of Kent apologised for causing offence after wearing a Blackamoor brooch to a luncheon at Buckingham Palace which was attended by Meghan Markle.

Now I can reveal that the world’s leading auction house, Christie’s, has stopped selling the historic art figures. It removed them from last month’s sale of items belonging to the late Trans-atlantic society hostess Audrey Pleydell-Bouverie.

‘It’s shocking,’ an insider tells me. ‘These figures are pieces of art and auction houses should not prohibit their sale due to a fear of a backlash from the woke brigade.’ The figures, known as Blackamoors, are depictions of dark-skinned people, generally slaves or servants of Moorish descent. 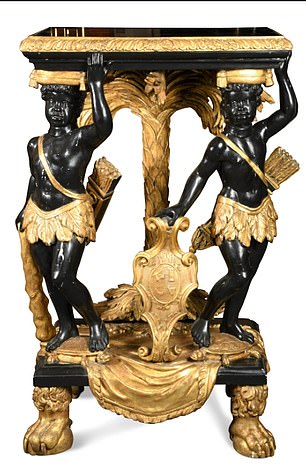 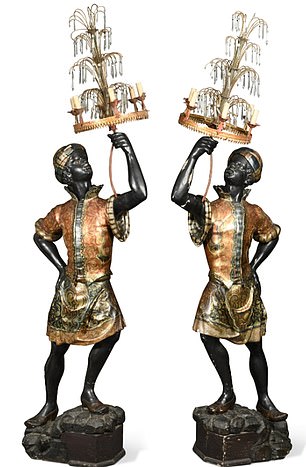 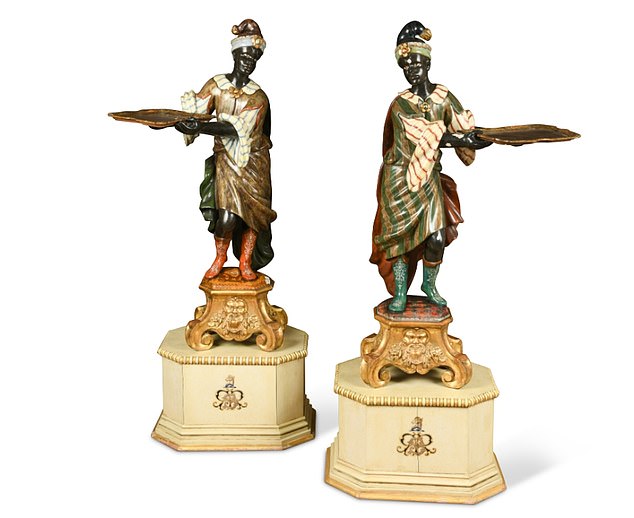 Now I can reveal that the world’s leading auction house, Christie’s, has stopped selling the historic art figures

‘Christie’s refused point-blank to sell her Blackamoor items, of which there are four in this collection,’ explains my source.

However, Christie’s went ahead with the sale of 277 other lots from Pleydell-Bouverie’s collection. The English socialite, who died in 1968, was the illegitimate granddaughter of Edward VII.

The Blackamoor items are now being sold at Cheffins auction house in Cambridge. They will go under the hammer today and are expected to fetch up to £5,000 each.

Of the Pleydell-Bouverie items, a Christie’s spokesman tells me: ‘We can’t comment on objects we’re not selling.’

I can reveal the Chancellor has acquired a fox-red Labrador puppy, called Nova, likely to outshine Dilyn — Boris and Carrie Johnson’s scruffy, badly-behaved mutt next door.

‘Rishi’s family have wanted to get a puppy for months,’ a friend tells me. ‘His two little girls fell in love with Dilyn and wanted a dog of their own.’ No doubt, Sunak, and his wife, Indian billionaire’s daughter Akshata Murthy, will ensure their puppy is well-trained. 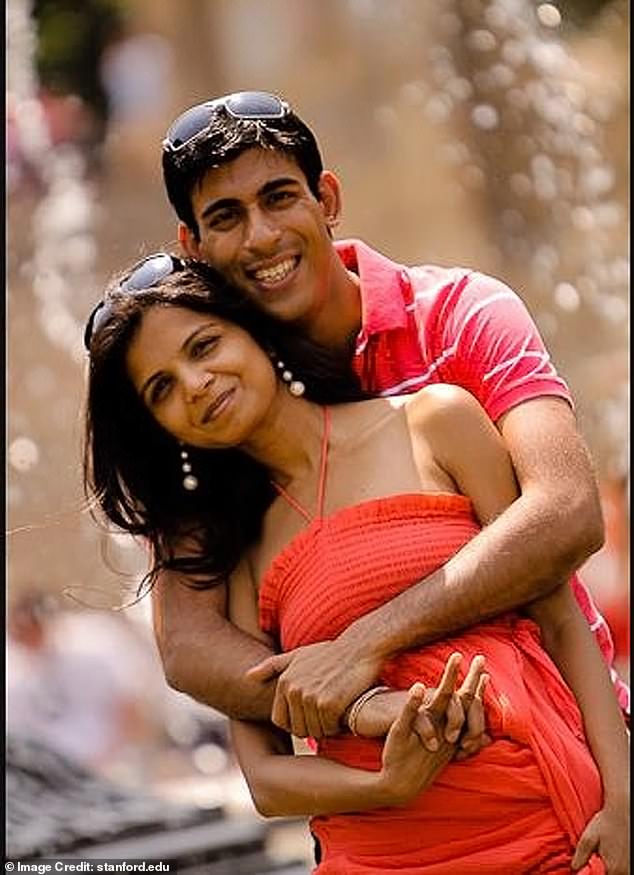 The Prime Minister’s Jack Russell-cross has wreaked havoc in Downing Street — accused of chewing furniture, and doing something rude to Dominic Cummings’s leg.

Meanwhile, I hear Carrie is struggling to keep BoJo on a tight leash: he was spotted on a night out after the football on Tuesday at Bentley’s bar and grill in Mayfair.

Known through her career as a blonde bombshell, Jerry Hall has undergone a dramatic transformation. The statuesque Texan model, 64, who’s married to media tycoon Rupert Murdoch, 90, has dyed her hair red to herald the end of the pandemic.

‘I just want to have some fun,’ says the ex-wife of Sir Mick Jagger.

‘I want to experiment. 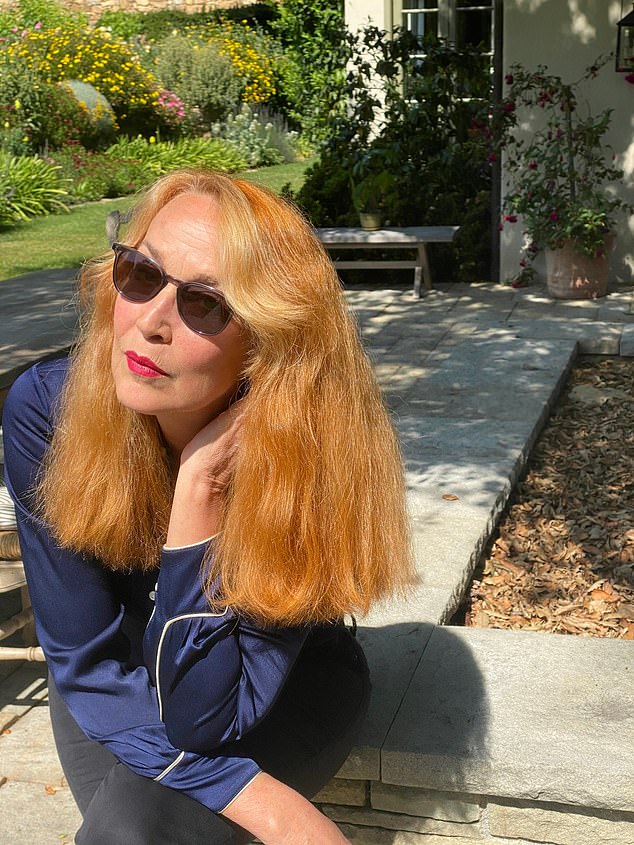 The statuesque Texan model, 64, who’s married to media tycoon Rupert Murdoch, 90, has dyed her hair red to herald the end of the pandemic 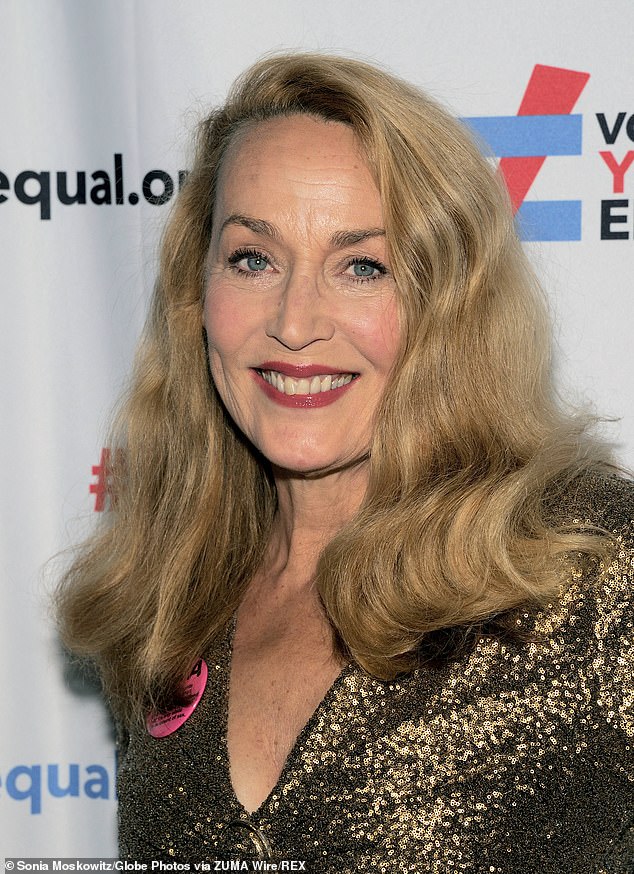 Known through her career as a blonde bombshell, Jerry Hall has undergone a dramatic transformation

‘I wanted my hair to look as bright as I feel celebrating coming out of lockdown.’ To do so, she enlisted Alex Brownsell, of trendy hairdressers Bleach London, to dye her tresses copper.

Her model daughter Georgia May Jagger is a co-owner of Bleach London’s Los Angeles outpost.

‘As women, we’re told you have to act a certain way at a certain age, and I think that’s going out of fashion now.’

Tart-tongued Strictly judge Craig Revel Horwood has set a wedding date — but there’s no rush to buy a hat.

‘It’s in August 2023,’ says the choreographer, 56, who’s due to exchange vows with horticulturalist Jonathan Myring. ‘We’ve booked the venue, which is gorgeous. It’s going to be on Rutland Water, because we’re moving to Northamptonshire, where Jonathan is from.’

They’ve done well to survive lockdown, he admits: ‘I have been getting on his nerves a bit.’

Whoever said ‘actors never retire, they just get less and less work’ should speak to Dame Maggie Smith. At the age of 86, the Downton star’s fortune has hit almost £7.1 million.

The Oscar winner has just revealed that her acting assets held in her business, Dame Margaret Cross Productions Ltd, have risen by £500,000 in a year despite the pandemic.

And her career shows no sign of slowing down with a new Downton film currently shooting and three others in production.

Government Whip Alan Mak, who’s known for his boundless ambition, has become engaged, but his fiancee — blonde activist Cathy Watts — seems rather more shy. For in the picture he sent me of the day he proposed, only Mak’s grinning face can be seen. ‘I’m very lucky Cathy said yes,’ Mak, tells me. ‘We’re looking to marry next summer.’

Countdown as Sophie steps on the bridal path

Having swapped lingerie modelling and wild parties to become a Count’s fiancee in the Irish countryside, Sophie Anderton has finally set a date for her wedding.

I hear the former It-girl, 44, who rose to prominence as the face of Gossard bras, is to exchange vows later this month with Count Kaz Balinski-Jundzill, 52, at Glendalough House, the Polish aristocrat’s 1,500-acre estate in County Wicklow, Ireland.

The couple have postponed their wedding twice because of lockdown restrictions.

A friend tells me: ‘Sophie is counting down the days until she becomes Countess Balinski.’ 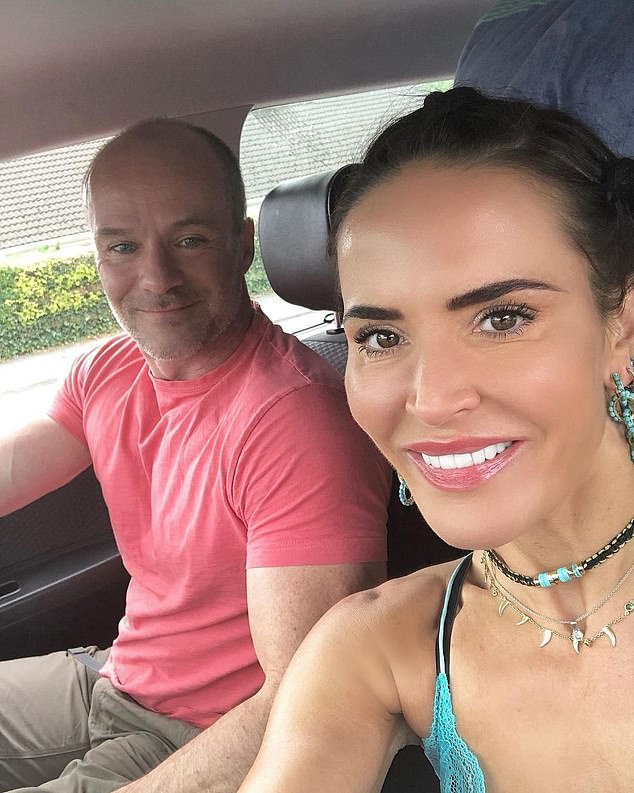 Having swapped lingerie modelling and wild parties to become a Count’s fiancee in the Irish countryside, Sophie Anderton has finally set a date for her wedding