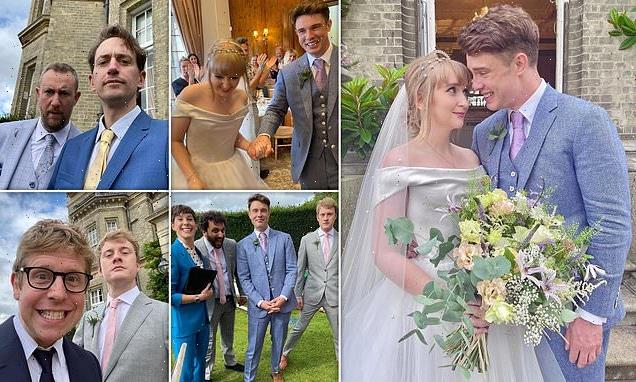 Ed Gamble is MARRIED! Comedian weds fiancée Charlie Jamison at lavish estate surrounded by celebrity pals after their big day was pushed back repeatedly due to pandemic

The comedian, 35, tied the knot with Charlie, 28, on Thursday in a stunning ceremony held in the grounds of lavish estate Hedsor House and Park, located on the Buckinghamsire/Berkshire border, surrounded by the pair’s celebrity friends.

Bride Charlie confirmed the nuptials by sharing a beautiful snap from the couple’s big day to Instagram, as the pair finally got to say ‘I do’ after being forced to repeatedly push back their wedding amid the pandemic. 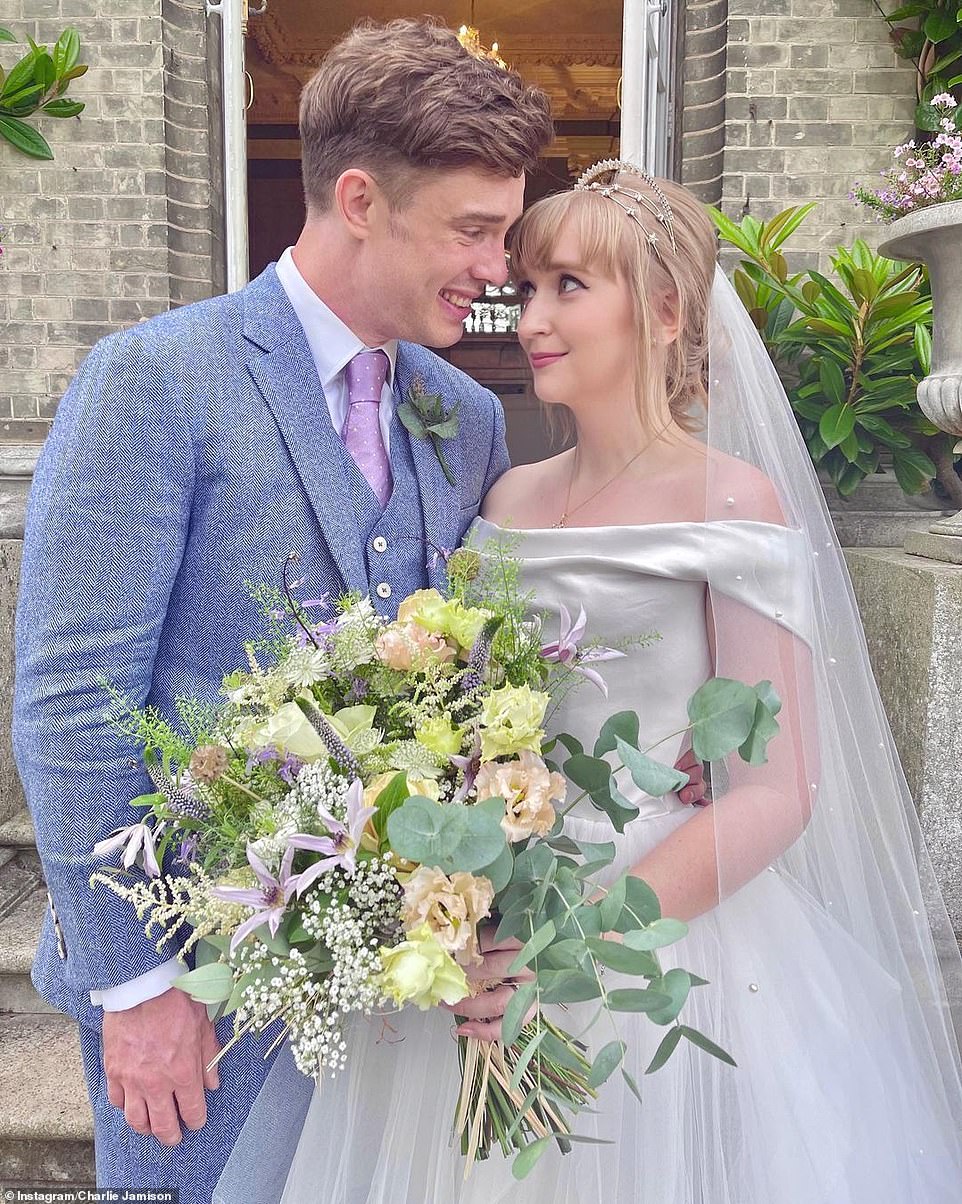 Congratulations: Ed Gamble, 35, and fiancée Charlie Jamison finally tied the knot on Thursday after being forced to postpone their big day repeatedly due to the pandemic

Posting to social media the morning after their wedding, Charlie shared a photo of herself and husband Ed looking lovingly at each other.

While he was suited and booted in a three-piece blue suit and lilac tie, Charlie stunned in her bridal gown that sat just off the shoulder and paired a satin bodice with a pleated skirt.

She wore her blonde tresses up into an elegant up-do framed by a jewelled headband and wore a long veil embellished with pearls, while clutching onto a huge bouquet of flowers.

Charlie simply captioned her photo with the date of her wedding day: ‘9/9/21,’ and an emoji of a ring. 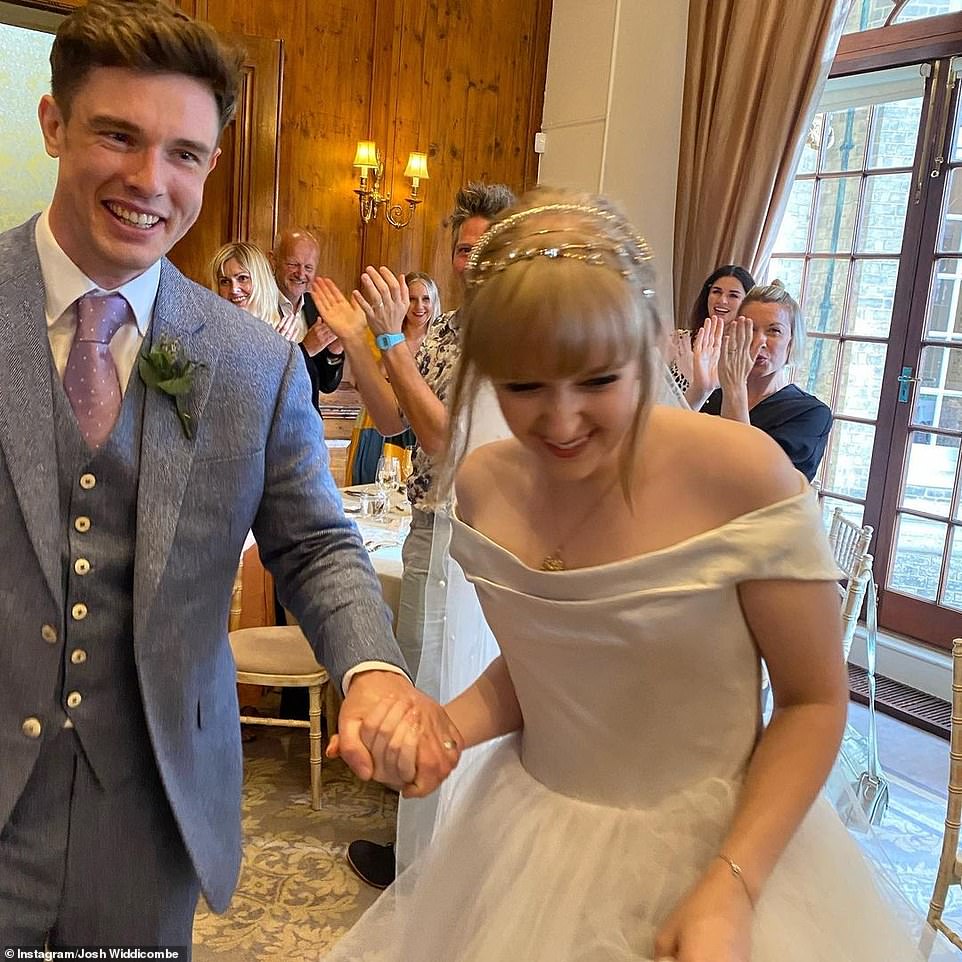 Mr and Mrs: The comedian and his wife, who works in TV production, looked the picture of happiness as they hosted a lavish wedding reception at a country estate 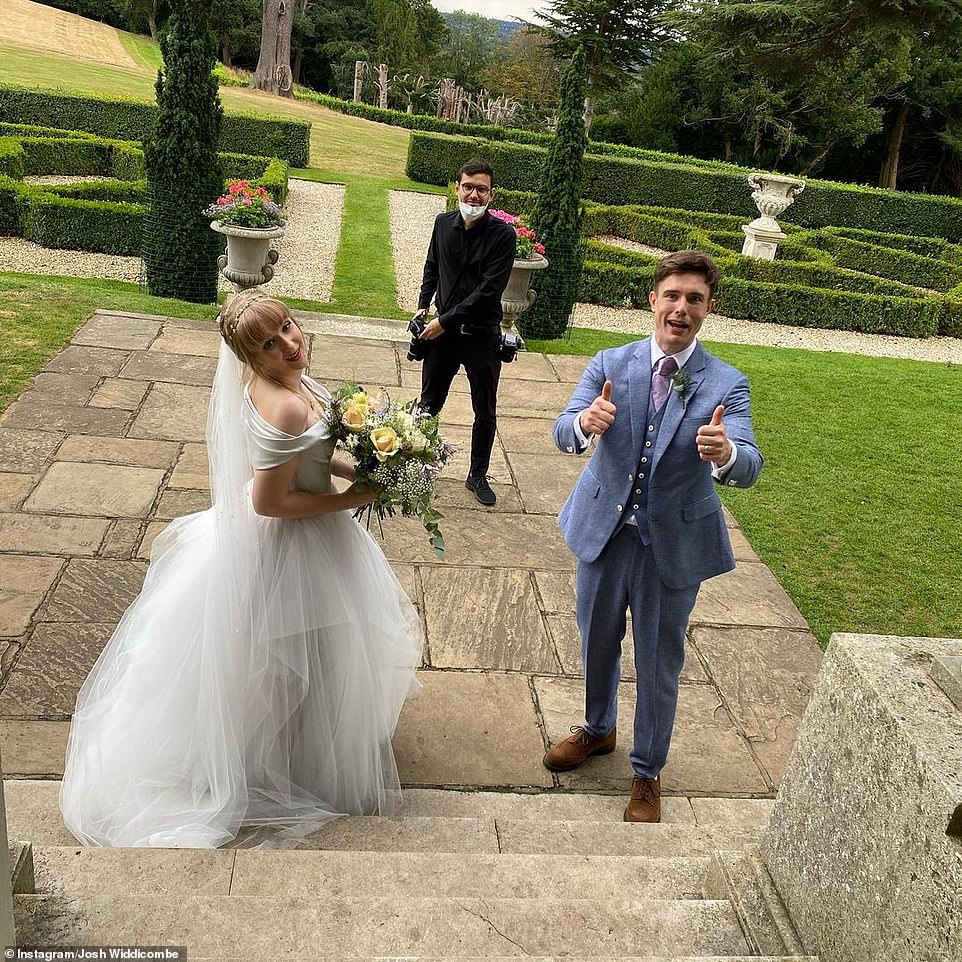 I do: Ed looked dapper in a three-piece blue suit, while bride Charlie stunned in a satin white dress with pleated skirt and a long embellished veil

Not surprisingly, the TV production worker and Ed were inundated with congratulatory messages from fans and celebs a like.

Model Hannah Cooper, who is married to comedian Joel Dommett, posted: ‘So frikkin beautiful guys!!! Love to you both!!!’

Comedian Felicity Ward commented: ‘Yayyyyyyy. You did it! All our love.’

Stars that had been in attendance were also seen sharing snaps from Ed and Charlie’s big day, with stand-up star John Robins giving fans a glimpse into the nuptials.

In one photo, groom Ed can be seen flashing a smile while hanging out with fellow comedians James Acaster, who appeared to be a groomsman, Nish Kumar and Suzi Ruffell, while another saw bride Charlie chatting with guests inside the venue’s Georgian mansion. 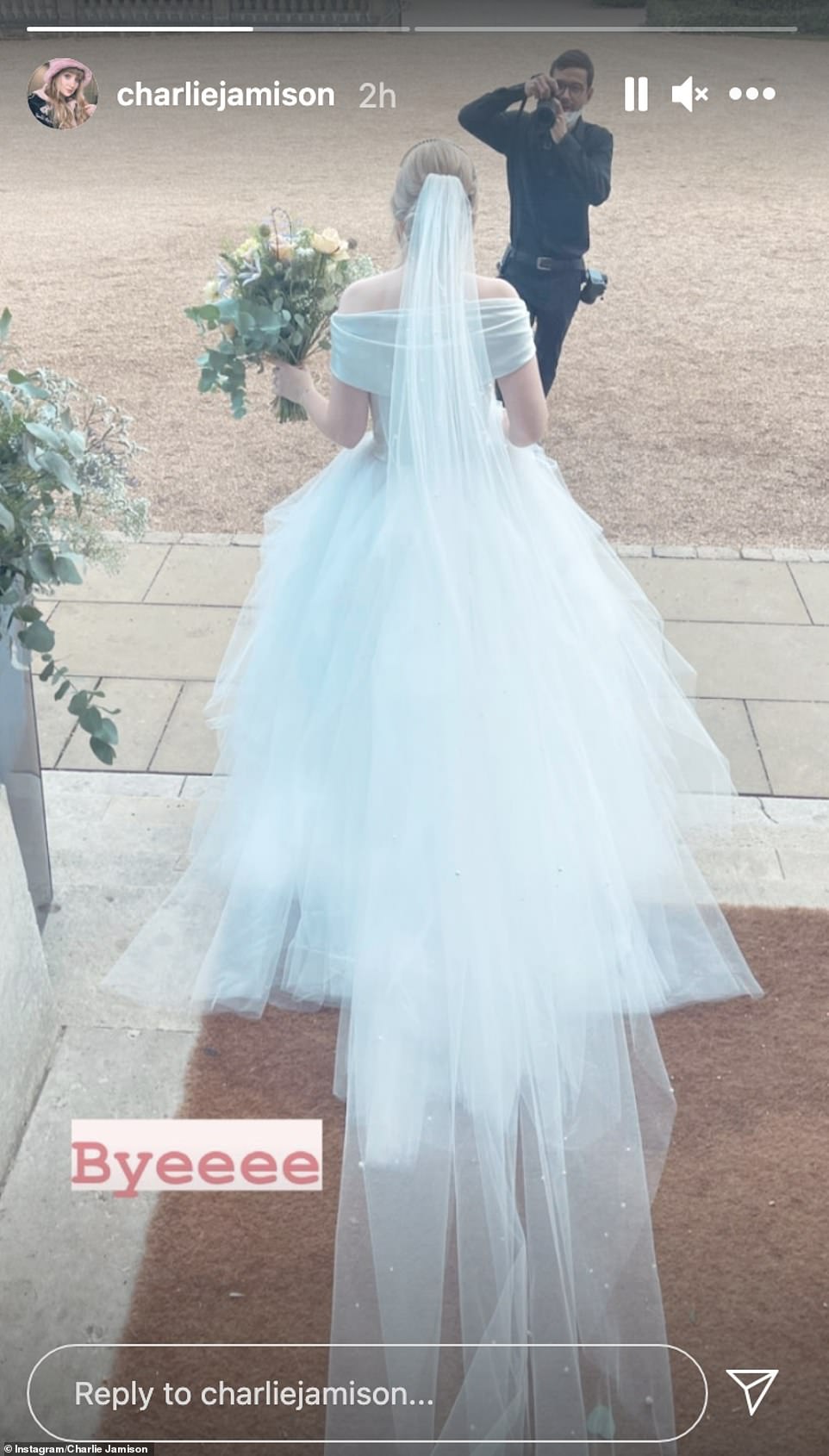 Beautiful: Charlie gave fans a better look at her dress as she shared snaps from the big day to Instagram the morning after the couple’s wedding 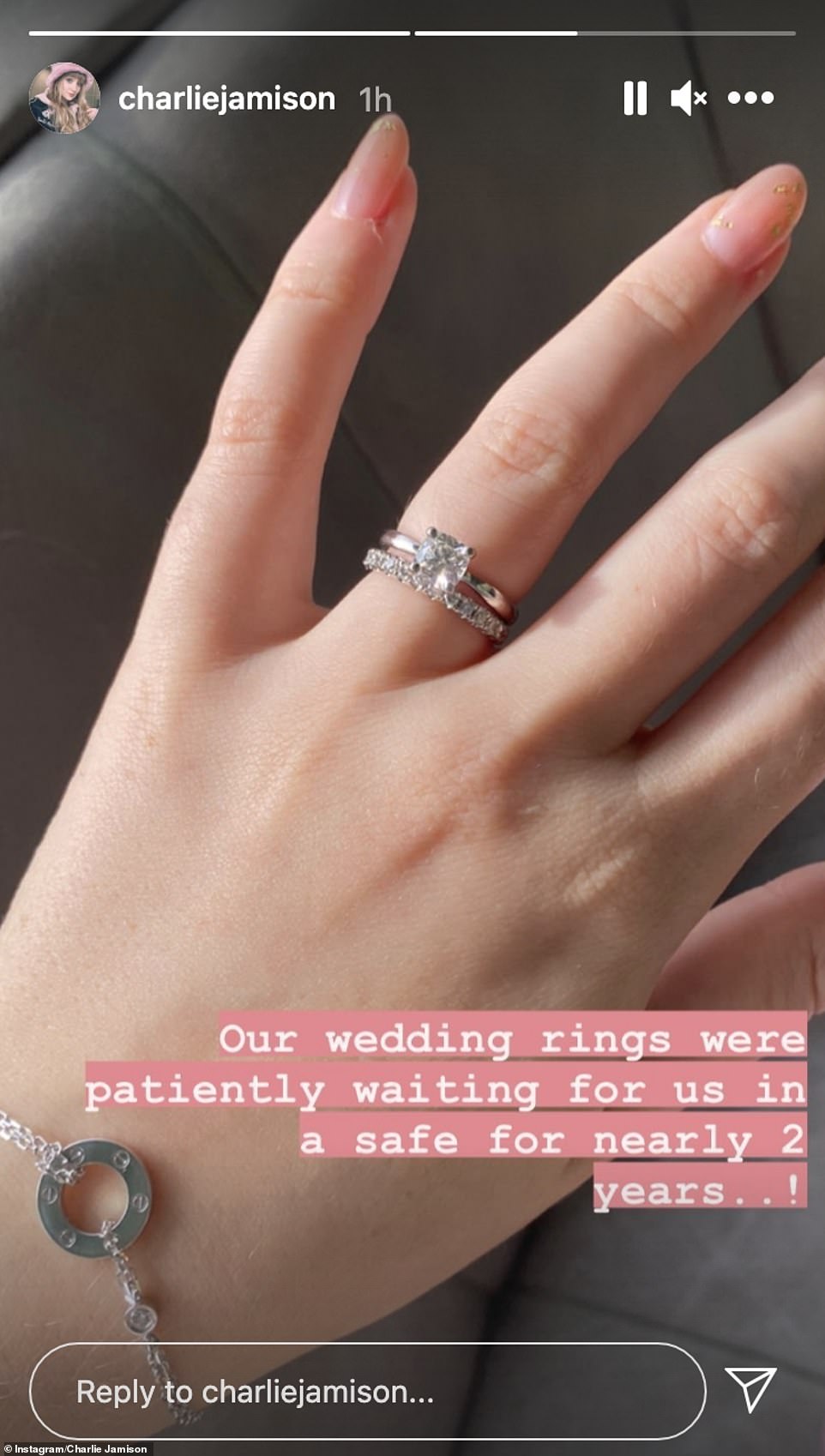 Finally hitched! She revealed the pair’s wedding rings have been in a safe for two years due to the pandemic halting their plans to get married on multiple occasions 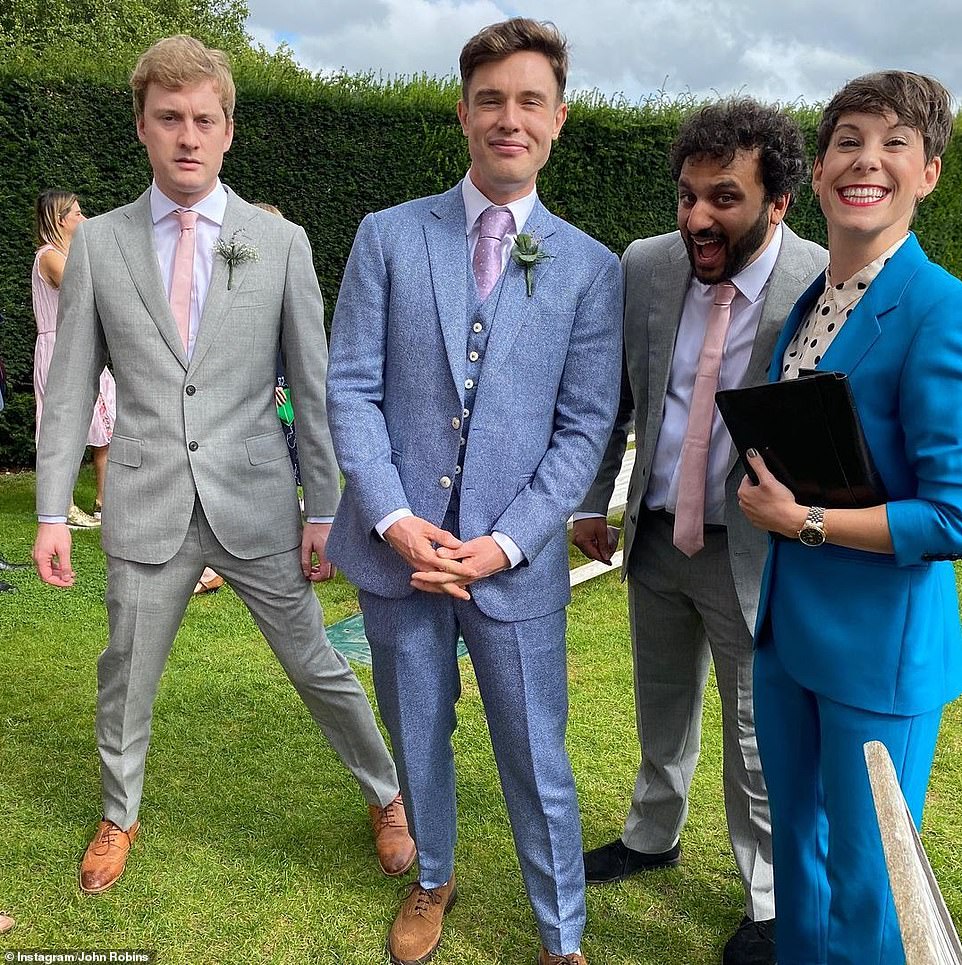 Gang’s all here: Ed was seen hanging out with his Taskmaster co-stars James Acaster, Nish Kumar and Suzi Ruffell during the celebrations (pictured above L-R)

Included in his wedding post was a photo of a jubilant Ed enjoying a dance with wife Charlie on the dance floor as the wedding party got well and truly underway.

‘Absolutely amazing day celebrating the marriage of these two brilliant people (and interrupting their photoshoot),’ Josh shared with his Instagram followers alongside a photo of Charlie and Ed moments after they tied the knot. 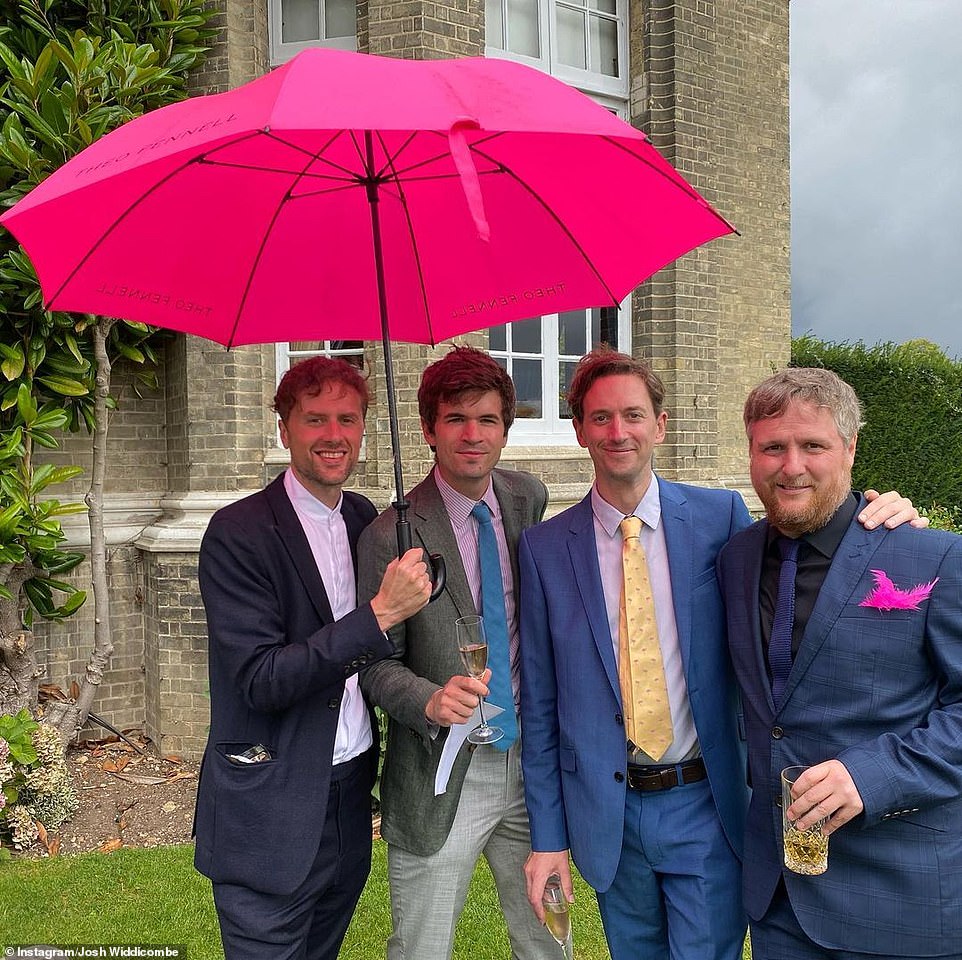 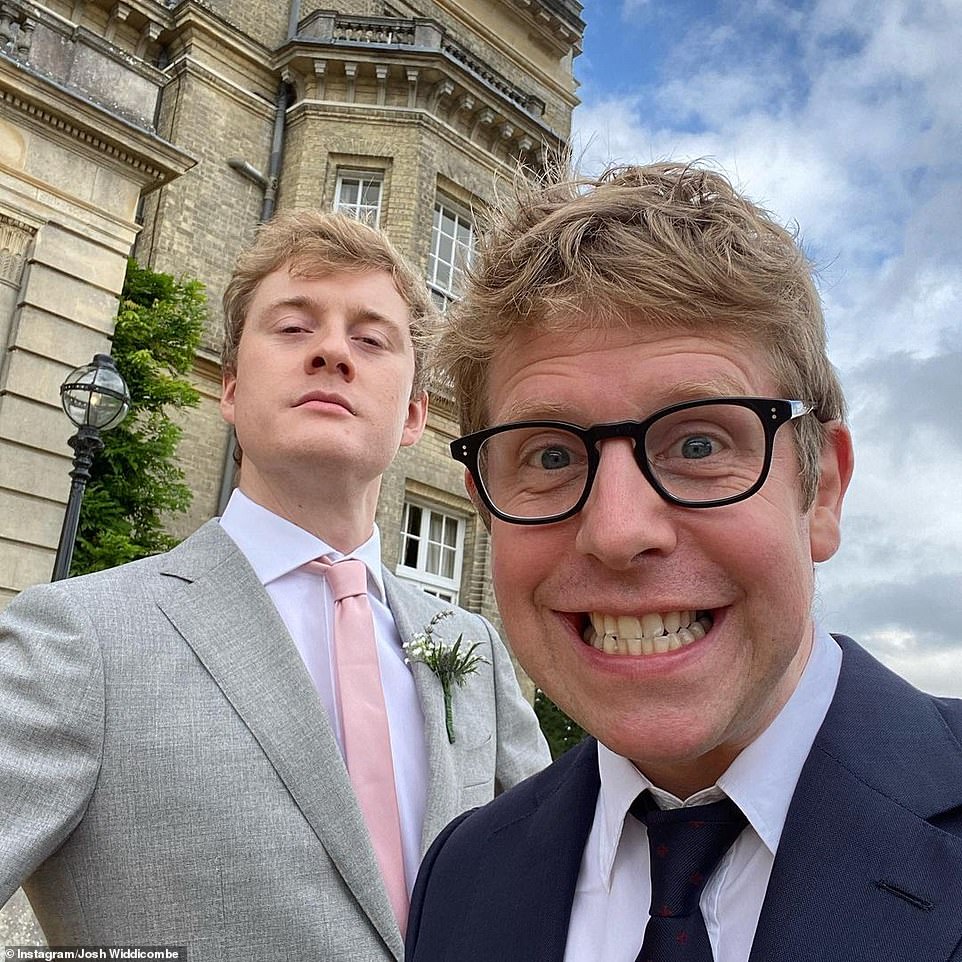 Smile: Josh posted a selfie of him grinning from ear-to-ear with stand-up star James, who appeared to be a groomsman on the day 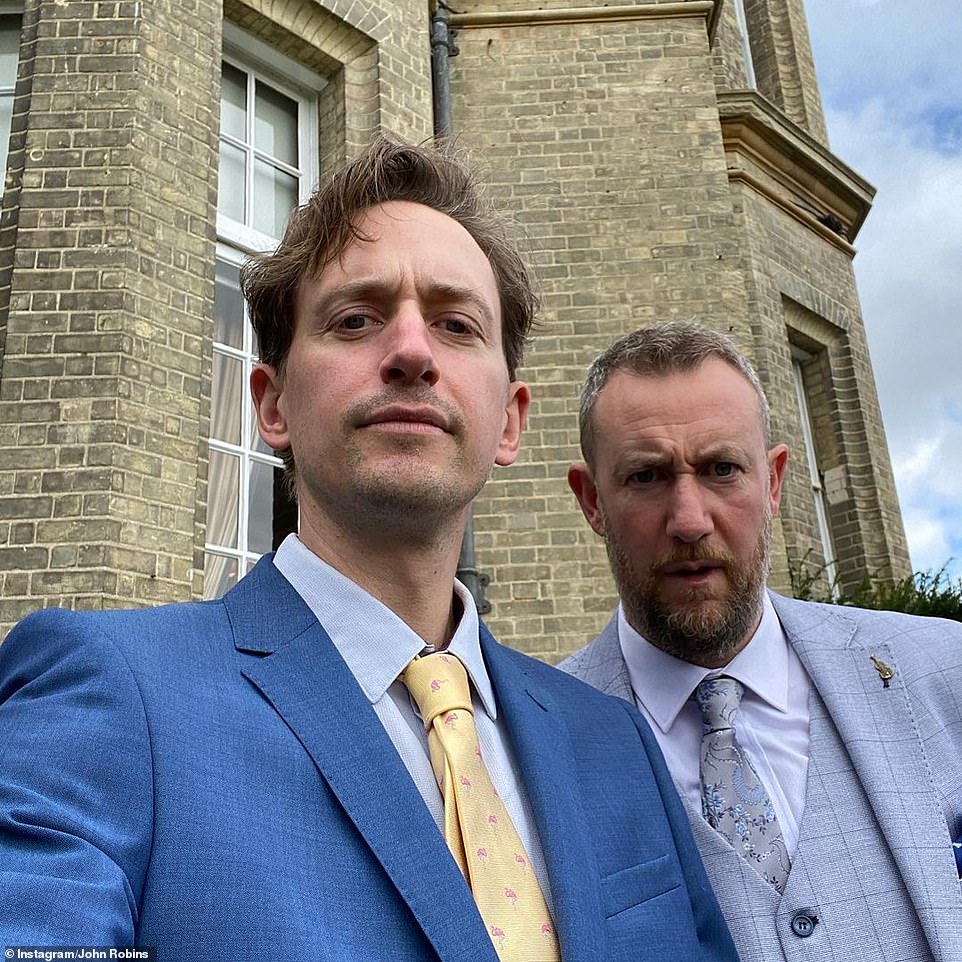 Out in force: Stand-up regulars John and Alex Horne were suited and booted for the occasion

The pair were seen posing in front of grand steps together for their wedding photographer, with Ed flashing Josh a thumbs up.

The pair will no doubt be thrilled to have married, after being forced to repeatedly push back their wedding plans due to the coronavirus pandemic.

Charlie revealed that the couple had stored their wedding rings in a safe for the last two years as they desperately tried to reschedule their big day.

Speaking about having to postpone their wedding on multiple occasions, Ed, who appears regularly on comedy panel shows Mock The Week and Taskmaster, revealed the pair initially planned to wed in April 2020. 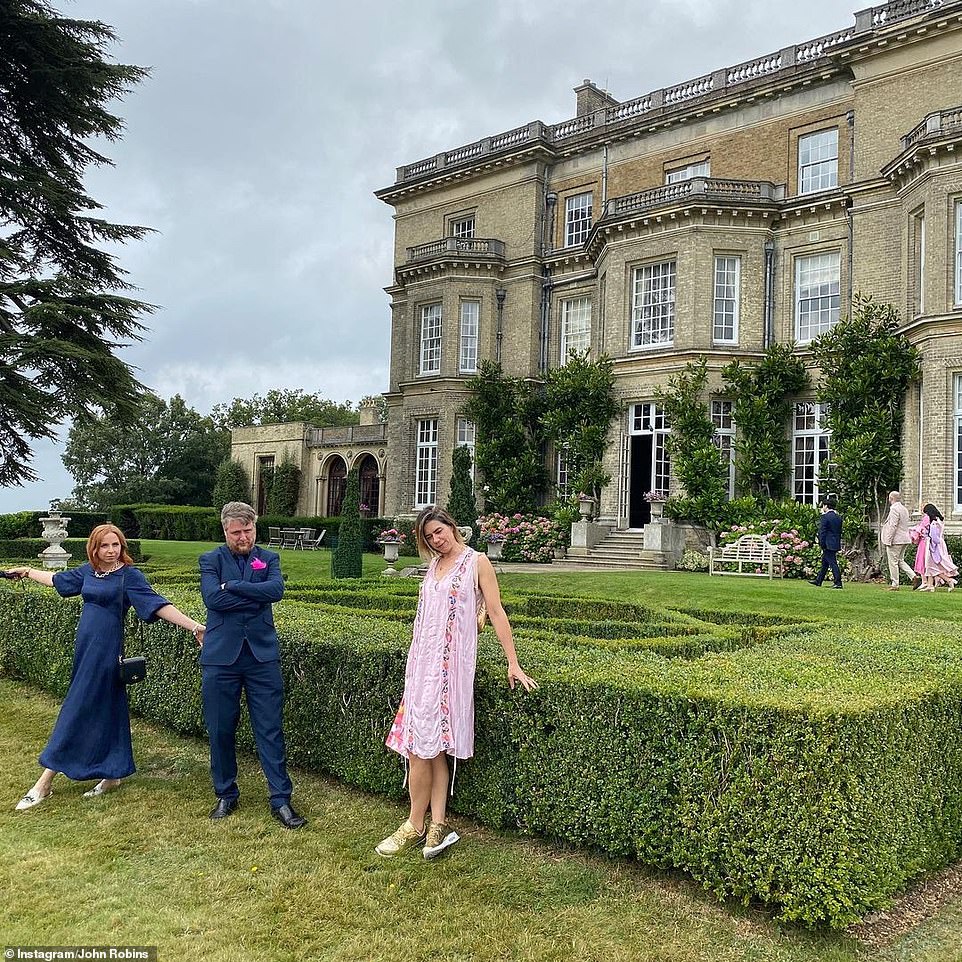 Idyllic: Ed and Charlie wed at a stately home, with guests kicking back in the lavish grounds (pictured above L-R: Rachel Horne, Tim Key, Loulie Sanders) 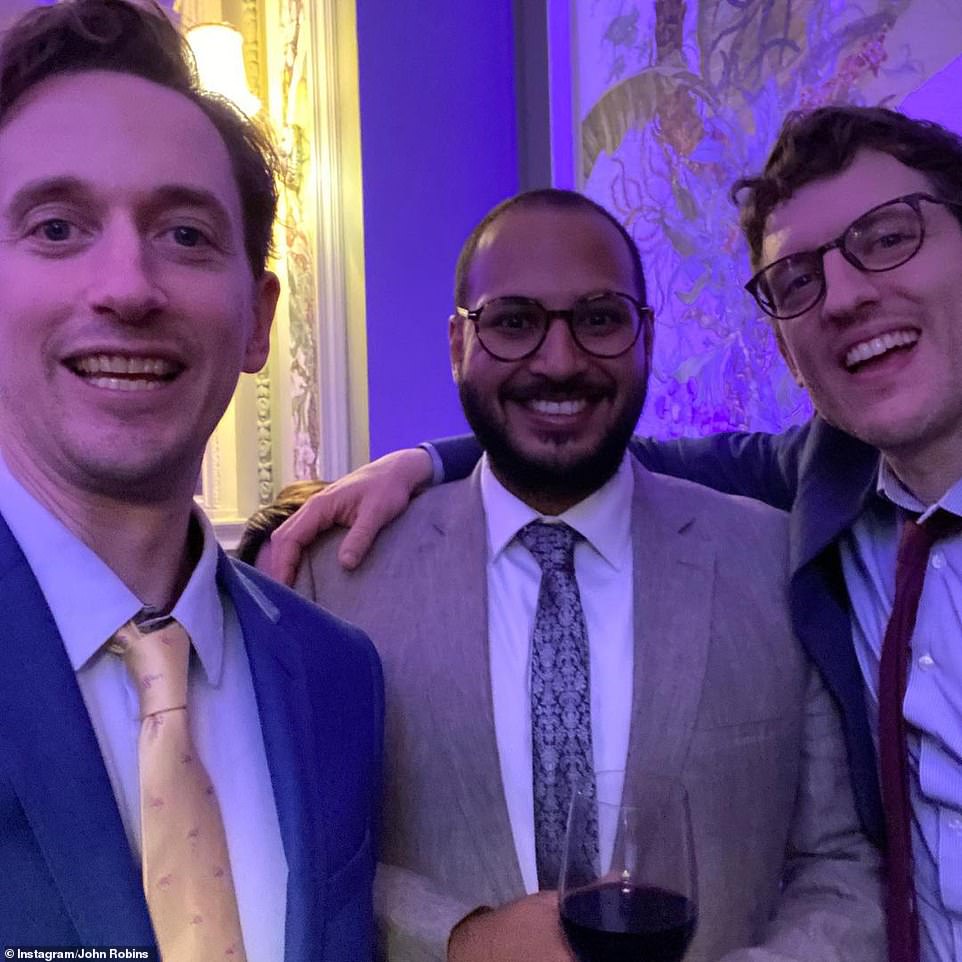 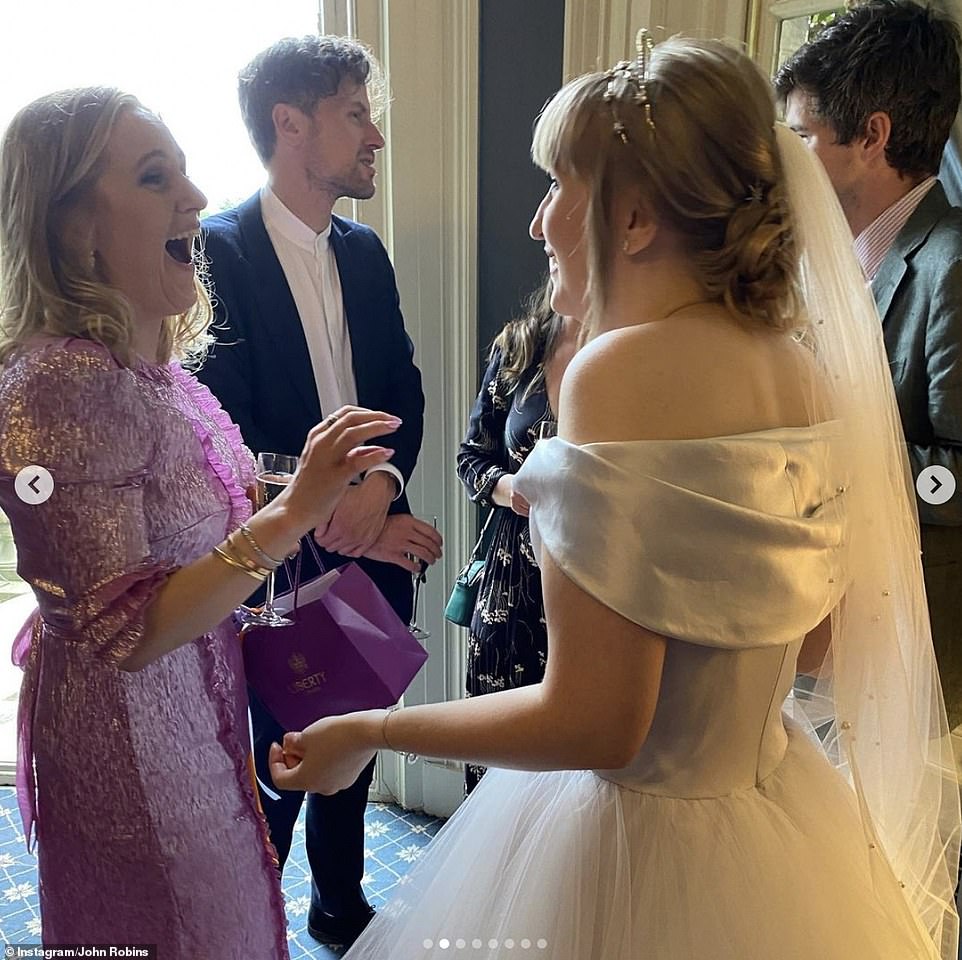 All eyes on her: Bride Charlie greeted guests inside the wedding reception in one snap 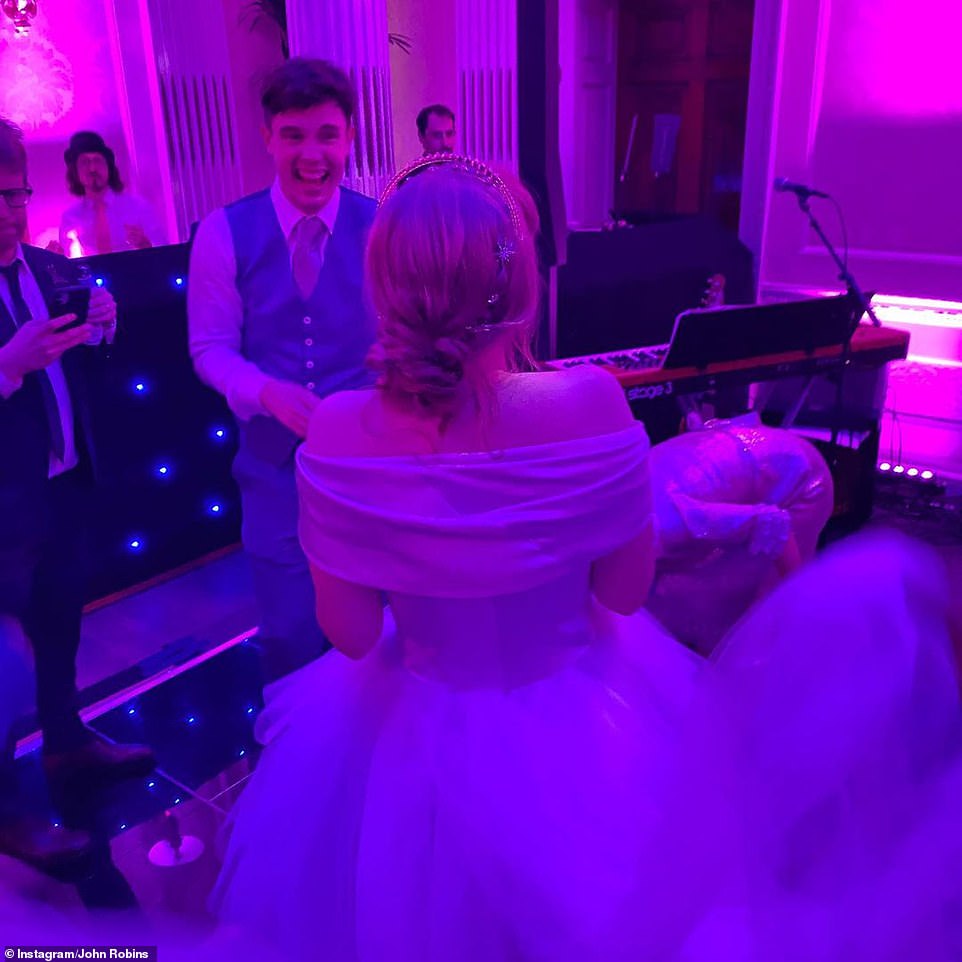 Dance the night away: A jubilant Ed was seen having a ball as he enjoyed a dance during the lavish reception with his new bride Charlie

Speaking to The Express in August last month, Ed explained: ‘It was a real rollercoaster because the first time we had to postpone it was April 2020, and that was obviously in the thick of it being the really worrying start of the pandemic.

‘And it just felt very new and very raw, and that wasn’t a nice feeling to have to postpone the wedding then.’

‘Sensible, we thought, move it to March 2021, it will definitely be over by then. And of course it wasn’t,’ he said.

England was thrown back into a lockdown in November last year, with restrictions continuing across the Christmas period and well into 2021. 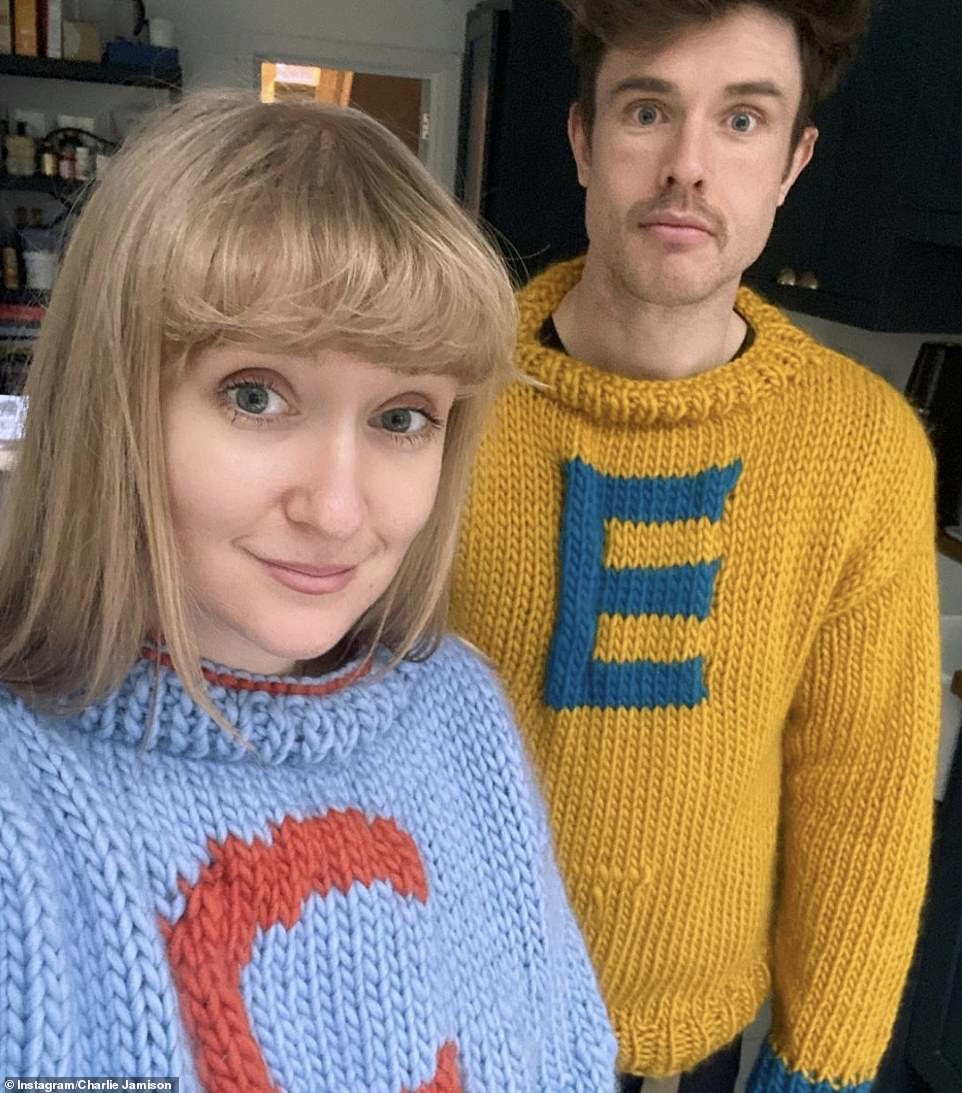 ‘It was new and raw’: Ed previously revealed that it was a ‘real rollercoaster’ for the couple, who had to reschedule their original April 2020 wedding on multiple occasions

Ed added that he and Charlie had even considered changing their wedding to January 2021, three months prior to their planned date, and attempting a smaller ceremony but the restrictions in place at the time deemed their plans impossible.

The couple, who have been dating since 2011, then attempted to reschedule their nuptials to January 2021 and were happy to settle for a smaller ceremony.

While postponing the first time round had been ’emotional’, Ed admitted that he found the whole process ‘annoying’ the second time round due to the admin that came with it.

Luckily for the pair, their plans for a September wedding were able to go ahead, thanks to previous Covid restrictions in place no longer being legally required as of July 19 and social distancing and group limitations being ditched.

Ed and Charlie have been dating for a decade, first getting together in 2011. 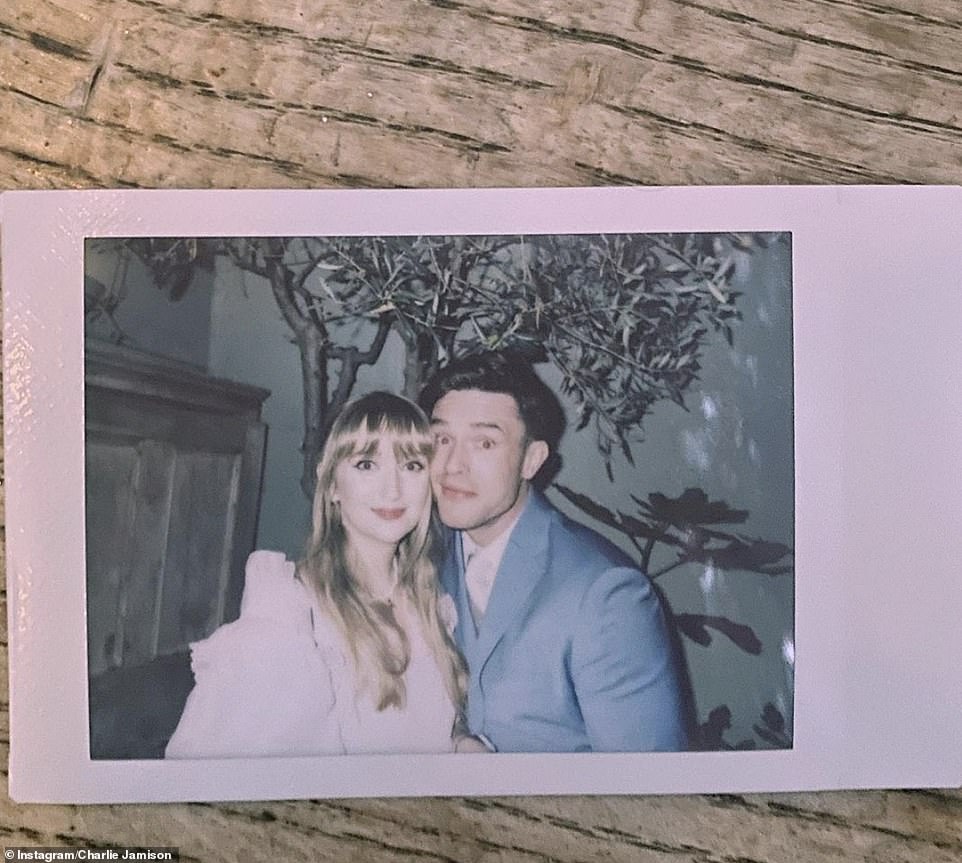 Long term loves: Ed and Charlie have been dating for a decade, first getting together in 2011