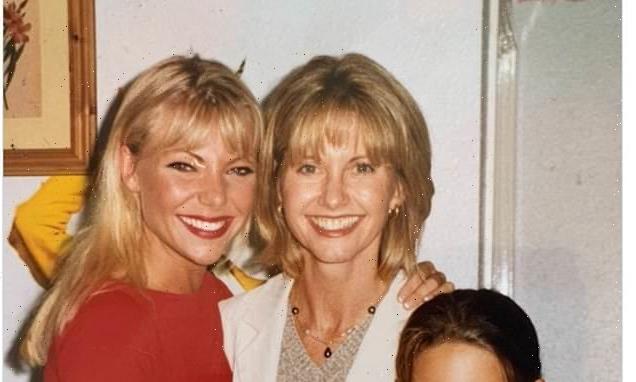 ‘I now start my own battle with this disease’: Ex-EastEnders star Samantha Womack reveals she has breast cancer as she pays tribute to the late Olivia Newton-John

EastEnders legend Samantha Womack has been diagnosed with breast cancer.

The soap star, 49, announced that she she’d ‘started her own battle’ with the disease as she paid tribute to Olivia Newton-John, who died on Monday morning aged 73 after long fight with cancer.

In her tribute she shared a picture of the pair alongside Olivia’s daughter Chloe taken in 1993 when Samantha had played Sandy in the West End production of Grease. 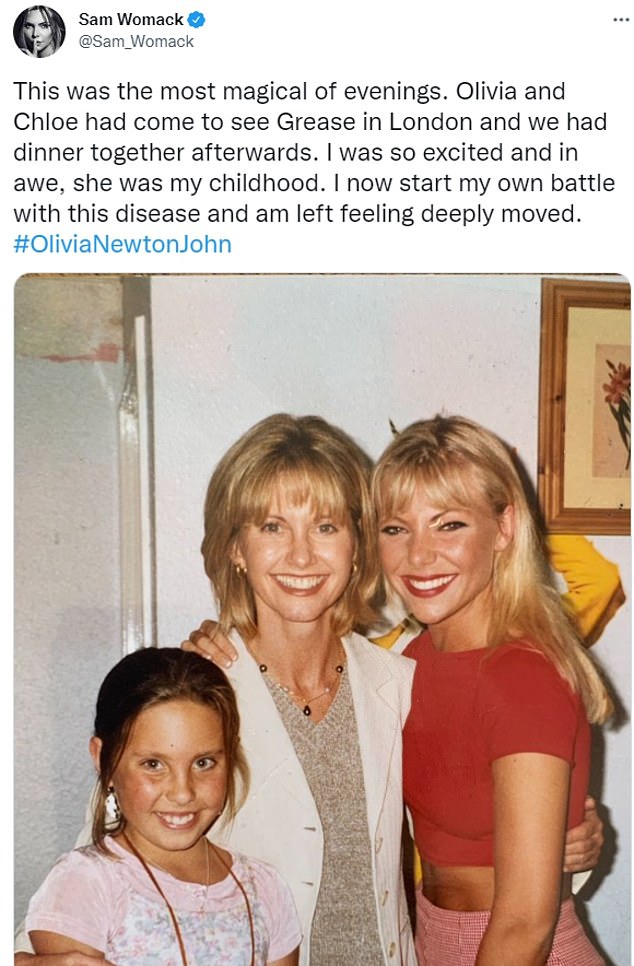 Candid: Ex-EastEnders star Samantha Womack revealed she has breast cancer as she paid tribute to the late Olivia Newton-John in a 1993 image with the late actress and her daughter Chloe

Samantha captioned the image: ‘This was the most magical of evenings. Olivia and Chloe had come to see Grease in London and we had dinner together afterwards.

‘I was so excited and in awe, she was my childhood. I now start my own battle with this disease and am left feeling deeply moved. #OliviaNewtonJohn.’

Samantha, who famously played Ronnie Mitchell in EastEnders, was immediately flooded with messages of support from her celebrity friends.

Referencing the star’s upcoming stint in the West End production of The Lion, The Witch and the Wardrobe, comedian Shappi Khorsandi penned: ‘Sending the most brilliant White Witch support and love x’ 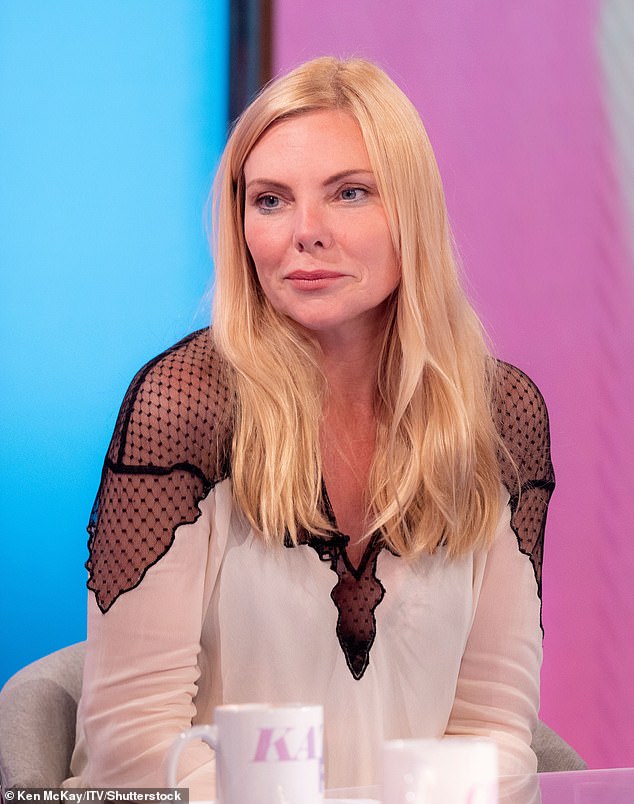 Heartbreaking: Samantha, who shares children Benjamin, 21, and Lili Rose, 17, with ex-husband Mark, offered no further details on her diagnosis (pictured in July 2022)

Samantha, who shares children Benjamin, 21, and Lili Rose, 17, with ex-husband Mark, offered no further details on her diagnosis.

The star recently discussed her complicated family life as she revealed she was ‘proud’ that she is able to speak to her ex-husband, who she split from in 2020, ‘two or three times a day.’

She said: ‘Mark and I raised a family really well, so we agreed that we didn’t mind separating in terms of a traditional marriage, but actually I would really have suffered if we hadn’t maintained a friendship, because that was part of my life for 20 years.

Samantha is currently dating former Coronation Street actor Oliver Farnworth, 39, and the pair live together in Spain, after relocating to Valencia at the start of the year.

Olivia, who shot to international stardom thanks to her role as Sandy in the 1978 movie Grease, died surrounded by family at her home in southern California after a long battle with breast cancer.

Her husband revealed the actress’ final request was for donations to be made to the Olivia Newton-John Foundation Fund, ‘in lieu of flowers’.

The foundation funds research into plant-based medicine and holistic treatments for cancer.

In a final video posted just before Christmas, Olivia thanked her fans for their support over the years.

‘I just wanted to take this opportunity to wish all a primarily healthy, happy, peaceful Christmas,’ she said.

I know it’s been a very, very, very difficult time for everybody in the whole planet – so this is a time we can get together, celebrate each other and our families and whatever faith that you believe in we can express it with each other which is very important.

‘I want to thank you all for all of your support over the years and I wish you all the best and send you love and light.

Olivia’s battle with breast cancer first began in 1992 when she was just 44 years old. She was very open about her diagnosis and treatment, which famously included the use of medical marijuana.

The Macmillan Support Line offers free, confidential support to people living with cancer and their loved ones. Call 0808 808 00 00 for support

What is breast cancer?

Breast cancer develops from a cancerous cell which develops in the lining of a duct or lobule in one of the breasts.

When the breast cancer has spread into surrounding breast tissue it is called an ‘invasive’ breast cancer. Some people are diagnosed with ‘carcinoma in situ’, where no cancer cells have grown beyond the duct or lobule.

Most cases develop in women over the age of 50 but younger women are sometimes affected. Breast cancer can develop in men though this is rare.

Staging means how big the cancer is and whether it has spread. Stage 1 is the earliest stage and stage 4 means the cancer has spread to another part of the body.

The cancerous cells are graded from low, which means a slow growth, to high, which is fast growing. High grade cancers are more likely to come back after they have first been treated.

A cancerous tumour starts from one abnormal cell. The exact reason why a cell becomes cancerous is unclear. It is thought that something damages or alters certain genes in the cell. This makes the cell abnormal and multiply ‘out of control’.

Although breast cancer can develop for no apparent reason, there are some risk factors that can increase the chance of developing breast cancer, such as genetics.

What are the symptoms of breast cancer?

The usual first symptom is a painless lump in the breast, although most breast lumps are not cancerous and are fluid filled cysts, which are benign.

The first place that breast cancer usually spreads to is the lymph nodes in the armpit. If this occurs you will develop a swelling or lump in an armpit.

How is breast cancer diagnosed?

If you are confirmed to have breast cancer, further tests may be needed to assess if it has spread. For example, blood tests, an ultrasound scan of the liver or a chest x-ray.

How is breast cancer treated?

Treatment options which may be considered include surgery, chemotherapy, radiotherapy and hormone treatment. Often a combination of two or more of these treatments are used.

How successful is treatment?

The outlook is best in those who are diagnosed when the cancer is still small, and has not spread. Surgical removal of a tumour in an early stage may then give a good chance of cure.

The routine mammography offered to women between the ages of 50 and 70 mean more breast cancers are being diagnosed and treated at an early stage.