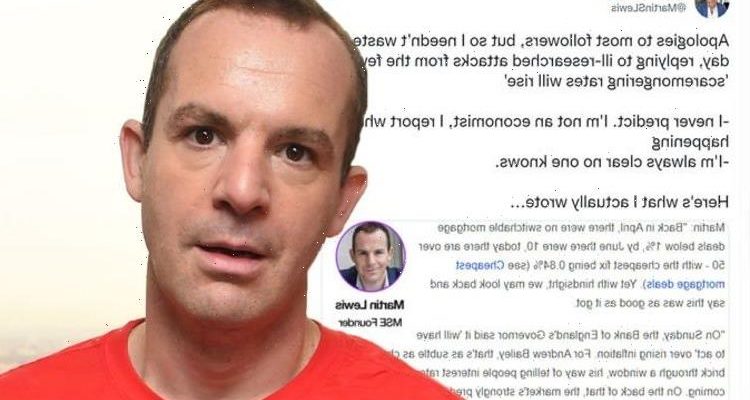 Martin Lewis offers advice to 40-year-old on getting mortgage

Martin Lewis, 49, has taken to Twitter today to respond to criticism levelled at his advice on mortgages. The Money Saving Expert hit out at a follower, before apologising to his 1.2 million followers for “replying to ill-researched attacks”.

Granty19893003 wrote to Martin: “Many happy mortgage holders? Didn’t you tell a lot of people to review their rates and their ERC’s as rates were more likely to be going up?

“You’re just as bad as the media with your scaremongering. How’s the small gas/electric companies you advised people to go with getting on? #bluff.”

Angered by this, Martin hastily replied: “Do research before carping c**p like this!

“1. I told people to CHECK their mortgage deal wasn’t too costly a few weeks ago (which is always good practise). Rates have risen since!

“2. I pushed for years for better regulation of small firms and warned about switching to them.”

Martin then sent out a separate tweet apologising to the rest of his followers for his rant.

He said: “Apologies to most followers, but so I needn’t waste my day, replying to ill-researched attacks from the few for ‘scaremongering rates will rise’.

“I never predict. I’m not an economist, I report what’s happening.

“I’m always clear that no one knows.”

He added: “Here’s what I actually wrote…”

Martin then included a screenshot of a story from his website about mortgage rates.

Here Martin stated key facts on the issue and what to do if the mortgage rates do increase.

Fans quickly leapt to Martin’s defence in the comments, telling him to ignore the hateful remarks.

“I’ve followed you and your website since year dot and it’s thanks to you that I was able to pay off my mortgage 7 1/2 years early and saved a ton of £s elsewhere.

“I cannot thank you enough for your fantastic life changing advice.”

MsLauraTeeee added: “Sick of people not realising the fact that you promote education.

“I have the luxury of time to educate myself, many don’t. For that, your literature is invaluable.

“Don’t let them grind you down Martin.”

Martin created MoneySavingExpert.com in 2003, and has been helping the public with save money since then.

In 2012 he began The Martin Lewis Money Show, initially with Saira Khan, and more recently with Angellica Bell.