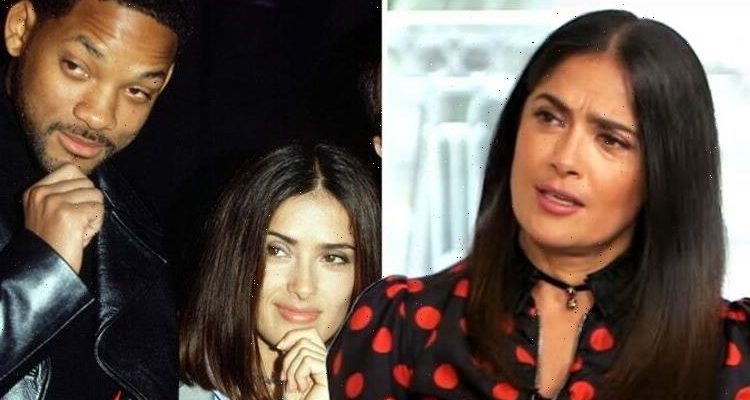 Salma Hayek, 55, congratulated Will Smith and other winners at Sunday’s Oscars in a new Instagram post. The House Of Gucci star penned a message, which shared her support for Will following his Best Actor win, despite the controversy surrounding him slapping Chris Rock.

Salma shared a series of photographs to her 20.8m followers, including a candid shot of her and Will at the ShoWest Awards in 1999.

She also added a snap of her and Samuel L. Jackson, who won the Academy Honorary Governor’s Award, from when they starred in Hitman’s Wife’s Bodyguard last year.

Alongside the photographs, Salma wrote: “Two of my favourite co-stars went home with Oscars last night.

“Congratulations on your amazing work @willsmith and @samuelljackson.

However, some fans were “disappointed” with Salma’s post and took to the comments to share their anger.

Martha fumed: “Wow! Didn’t expect that from you! Very disappointed!”

Andra echoed: “We should not stand by friends no matter what. If they f**k up, we need to tell them to do better/change/learn.”

And Roe said: “Truly disgusting behaviour and there is not any way you can defend that.”

However, some fans jumped to Salma’s defence, saying she was allowed to support her friend despite the controversy.

Raquel chimed in: “She can’t have her opinion? She has to give up on her friend because he didn’t make the best choice. She can post what she wants and celebrate her friend who won an award. Quit being so f***ing judgmental.”

Mike wrote: “I appreciate you focusing on the positives.”

And Rani added: “Yes congratulations to them all.”

Will has since issued an apology to Chris Rock saying he “deeply regrets” his behaviour.

In a statement to his 61.7m Instagram followers, he wrote: “My behaviour at last night’s Academy Awards was unacceptable and inexcusable.

“Jokes at my expense are a part of the job, but a joke about Jada’s medical condition was too much for me to bear and I reacted emotionally.

“I would like to publicly apologise to you, Chris. I was out of line and I was wrong.”

The controversial incident saw Will march on stage after Chris made a joke about Jada’s shaved head.

He then appeared to slap Chris in the face, before shouting: “Keep my wife’s name out your f***ing mouth,” once he returned to his seat.

The Academy also said it “condemns the actions of Mr Smith” and has “officially started a formal review”.