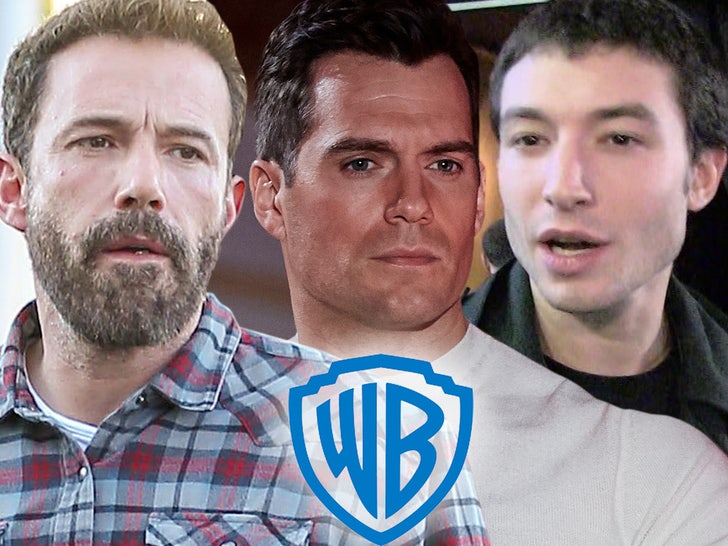 While Marvel is having a ball in movie land, there are grave concerns among the DC fanbase … especially amid rumors that their fave heroes are going to be nixed from the franchise.

Here’s the deal … there are a handful of movie insiders claiming to have seen a cut of the new ‘Flash’ film starring Ezra Miller, which just wrapped filming back in October. According to some of these folks … Warner is going in a whole new direction with the DCEU.

One reporter, Grace Randolph, spilled the alleged beans … saying that not only is this movie going to be the final Batfleck movie (meaning no more Ben Affleck as Batman) but it’s apparently also going to feature Henry Cavill‘s Superman sparingly … and then, never more.

Perhaps even more jarring … the claim that an entirely new Justice League is formed by the end — and that the new Batman, as it were, is actually going to be Batgirl (eventually), and Supergirl is the new Superman. She also says Michael Keaton comes back as his OG Batman — because of reported universe jumping, a la ‘Spider-Man’ — but he’s old now (obvs).

She adds, “This is new DC, let’s be open minded & give it a fair shot.” Another account that’s deep in the DC weeds puts it even more succinctly, writing … “the movie (The Flash) will erase every movie Snyder has done. Man of Steel, Batman v Superman and Justice League never happened now. Erased from continuity. Affleck and Cavill are both gone.”

Now, Ezra himself appears to have spoken out on these rumors — somebody captured a DM that’s been linked to his account, and in it … he says Zack Snyder‘s work isn’t undone.

The DM purported to be from Ezra reads, “No power or force in any known megaverse would or could ever erase Zack Snyder’s might (work). You can take that quote.”

Of course, that doesn’t really address the theory of WB pivoting away from Cavill, Affleck and the rest of the OG DC heroes that have already been established in Snyder’s world … which, if true, is a huge bummer — at least that’s what fans online are saying.

You can hop onto the Twitter-verse yourself and read up on how folks are reacting to this would-be news … and you’ll quickly see, they think Warner is sticking its head in the sand on what the people really want.

And that would be … more Superman, more Batman and more of what Snyder teased before stepping away from DC. All will be revealed soon — ‘The Flash’ is due out in 2022.