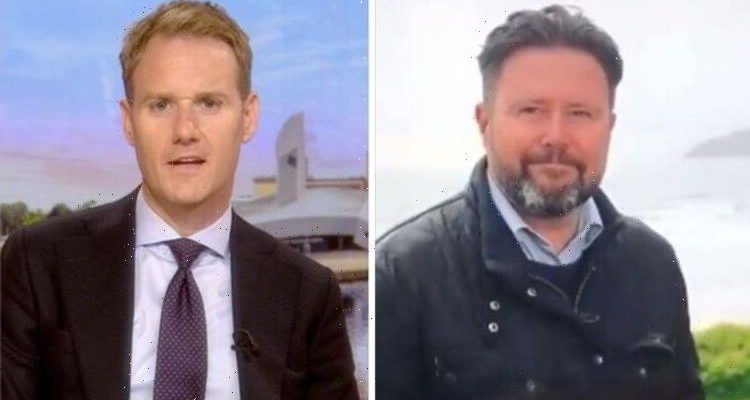 Dan Walker, 45, has taken to Twitter to respond to a cheeky post by BBC Breakfast and BBC News anchor Jon Kay. The star was included in the Twitter joke page, Accidental Partridge.

Following a blunder on BBC News this morning, Jon made a joke about his live on-air error, hinting that he should still be considered to replace Dan, who will soon be moving to Channel 5 News.

While reporting from Woolacombe, Jon took a long time to respond to presenter Fiona Bruce.

Fiona asked him a question about weather conditions and Jon failed to respond promptly.

He wrote, jokingly, in full view of his 41,500 followers: “That’s my job application completed, then… @Mrdanwalker.”

Fans and friends joked back with Jon.

@Hamishausk said: “Haha! Who needs the main Breakfast gig when you’ve made it onto accidental partridge!

“It’s what dreams are made of.”

Dan responded in a quote tweet with a series of clapping hands emojis, cheering his fellow presenter on for making light of the situation.

It comes after it was announced that Dan would be leaving BBC Breakfast.

Channel 5 News released the update to Twitter yesterday with a short clip of Dan speaking about his career move.

“@MrDanWalker will be bringing you the news at 5pm every day from now on.

“And he’s got something to tell you all – watch his video down below.”

Other BBC staff have since flocked to social media to respond to the shock announcement.

“You will be missed on @BBCBreakfast but you won’t miss the early alarm calls.”

Among Louise’s 253,100 followers, some took to the comments with their thoughts.

@PeterBridge18 said: “Who will replace him. He will be missed.”

@Donkey_cone quipped in reply: “I hear Piers Morgan is in the running.”