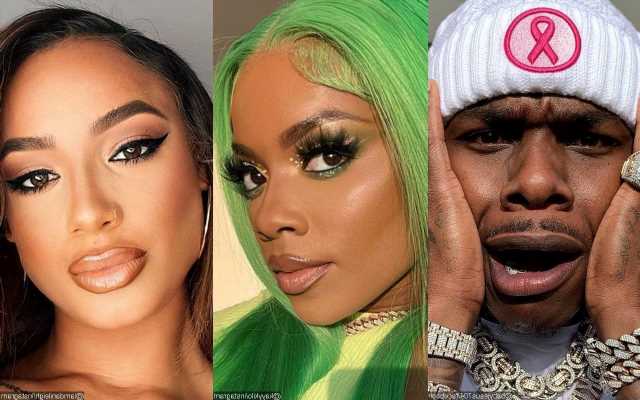 When getting things off her chest, the ‘Bend It’ raptress claims her mixtape ‘Cutthroat Love Letter’ was ‘overshadowed’ by the controversy surrounding the former couple.

AceShowbiz -The controversy surrounding DaBaby and DaniLeigh caused a bad impact on his former artist, KayyKilo. The “Bend It” femcee claimed she “got bashed for two weeks straight” after the “BOP” rapper was caught in an altercation with his baby mama back last year.

“People bash me when they think I’m in his crib when he gettin’ into it with DaniLiegh,” KayyKilo first said during an Instagram Live. “I’m in my own house, you know what I’m sayin’? So, at twelve o’clock when that happened, my whole tape was overshadowed, everything was-I couldn’t even really promote it because everybody’s bashing me from that.”

According to KayyKilo, DaBaby told her that he wouldn’t be able to promote her mixtape “Cutthroat Love Letter” because things went south between him and DaniLeigh. “You knew that your artist was dropping at twelve that night,” she stated.

“Even though we still tried to push, we still tried to promote, I got bashed for two weeks straight,” she continued. “People came to my page and left hate comments, told me how trash I was, all of that s**t just because they felt like I was supporting what he did… What did y’all want me to do?”

KayyKilo additionally claimed that at one moment, she “even called him crying one day” because she couldn’t bear the hate she was receiving.

DaBaby and were caught in an altercation while she’s feeding their baby daughter on November 15, 2021. Dani later claimed that the emcee kicked her and their child out of the house so that he could hook up with other women.

DaBaby called cops on Dani that night, claiming that his baby mama struck him. While she’s not arrested on Sunday, police were called again to the emcee’s house in response to a report of a disturbance on Monday. She has since been charged with two counts of simple assault.”