Cuba Gooding Jr.‘s motion to dismiss his groping charges doesn’t sit well with the D.A.’s Office, which is calling him out for using the alleged victim’s mental health as an excuse to toss the case.

The Manhattan D.A. responded to Cuba’s motion to dismiss the case, saying the Oscar winner and his legal team are jumping the gun. In docs, obtained by TMZ, prosecutors say the alleged victim’s mental health and expert evaluations of the surveillance videos … are matters to be addressed once Gooding is on trial.

Further, the D.A. basically calls out Gooding’s team for victim shaming, saying her mental health history is irrelevant to whether the actor touched her breast that night in the NYC bar. Prosecutors added … if the judge were to dismiss Gooding’s case, it would send a horrible message to the public — that the tactic of exposing an accuser’s past works.

Essentially, it would create a chilling effect for alleged victims coming forward.

According to the docs, the fact Gooding is a “world renowned” Oscar-winning movie star who has no prior convictions bares no relevance to his guilt or innocence in the matter.

Gooding’s lawyers filed the motion to dismiss last month, but the judge said she would not make any “rash decisions” … and tabled the matter for August 14.

As we reported … Gooding turned himself in last month a few days after a woman called 911 claiming he touched her breast without consent at a New York bar. He was charged with one count of misdemeanor forcible touching and one count of sexual abuse in the third degree … Cuba pled not guilty.

We obtained video of the incident via the bar’s security footage, as well as another run-in after the alleged groping incident.

The Oscar-winner’s attorneys, Mark Heller and Peter Toumbekis, claim he’s innocent and believe the video evidence is inconclusive. Their motion cited blog posts where the accuser allegedly said she was starving for attention and also suffering PTSD and anxiety disorder.

Cuba himself claimed she has a “warped mental state” and has denied any misconduct with her. His lawyers argued the case is plagued by inconsistencies and an alleged NYPD screw-up.

In the docs, prosecutors shoot down any claim of police misconduct … saying Cuba’s attorneys misrepresented the police report and NYPD’s initial investigation of the case. 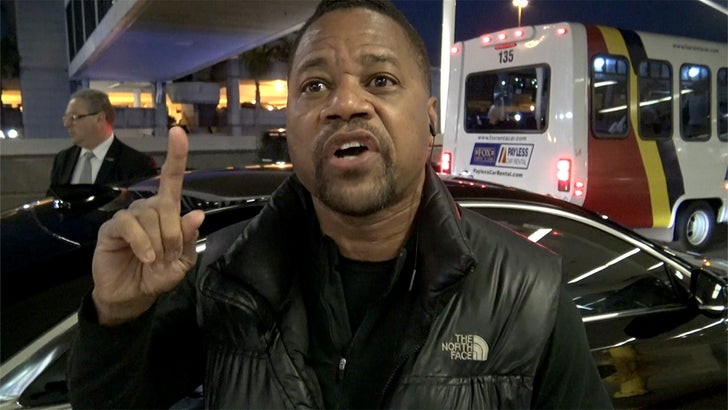 Gooding Jr. publicly stated he trusts the system, and believes he’ll be exonerated.