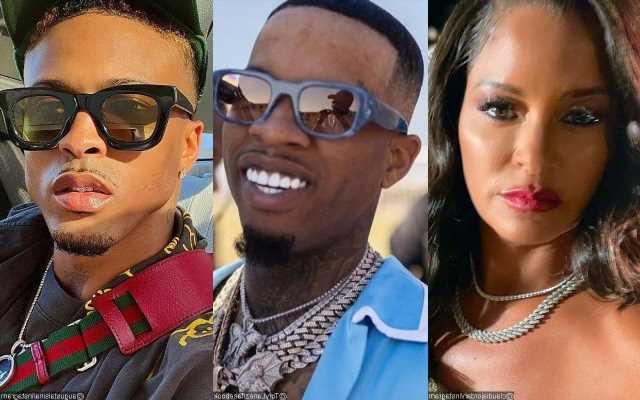 The ‘Real Housewives of Atlanta’ alum blasts the ‘Say It’ rapper after he’s caught lying by stating ‘nothing happened’ between him and the ‘I Luv This S**t’ crooner while a video shows the opposite.

AceShowbiz –Claudia Jordan made it clear that she is no fan of Tory Lanez and his alleged violence. Weighing in on Tory’s recent issue with August Alsina, the former star of “The Real Housewives of Atlanta” declared that the “Say It” rapper “must be stopped.”

Making use of her Twitter account on Tuesday, September 20, the 49-year-old TV personality wrote, “I can’t stand Tory Lanez. He must be stopped.” She went on reasoning, “Between the toupee, the humungous teeth, the tiny shoulders and the HUGE chip on his shoulder…. shawty is a ticking time bomb. Well more like a little firecracker… but yall get the gist!”

A few minutes later, Claudia retweeted a post that read, “Tory Lanez assaulted a black man and LIED about it. He didn’t trend. No one called August Alsina a liar. No one harassed Tory when ge [sic] got caught lying. Yall keep proving that yall just hate black women.”

Not stopping there, the former Bravolebrity also tapped the retweet button on a tweet discussing Megan Thee Stallion and Tory’s shooting case. “Boys can’t name five Tory Lanez songs but decided to be hardcore fans after he shot Meg. Weirdos,” it stated.

Aside from Claudia, many Twitter users accused Tory of lying that “nothing happened” between him and the “I Luv This S**t” crooner. “We’re literally witnessing how this [leperchaun] gets on the internet and lies and gaslights his victims,” one person wrote. A second added, “Tory publicly stated he had nothing to do with beating up August Alsina and we can clearly see his lying a** caught in 4K. He did the same with Megan! F**K HIM.”

“Y’all see how easily Tory lied and said he wasn’t there and wasn’t involved with August? And y’all expect me to believe he didn’t shoot Megan?” someone else pointed out. A fourth chimed in, “The fact that it took a man for y’all to actually believe that Tory Lanez did that to Megan… Y’all tiring.”

Many believed that Tory, who claimed that he was at the studio when the alleged assault happened, was lying about his and August’s situation after a video that saw him and August at the same place on Saturday night, September 17 was circulated online. There’s also a voice memo that unveiled that they were in a confrontation before Tory “sucker-punched” him.

As August’s “allegations are serious,” Tory is under investigation by the Los Angeles District Attorney’s Office. The Canadian rapper was also dropped from “Fall Back in Love Comedy & Music Jam” tour as tour creator Rip Micheals said that he witnessed the rapper hit August in the face.