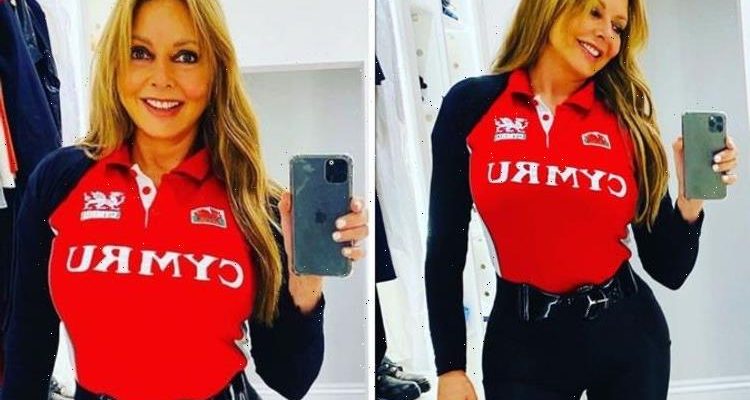 Carol Vorderman protects her haircut from the rain

Former Countdown star Carol Vorderman has taken to Instagram to show off her incredible figure in a patriotic outfit ahead of her beloved Wales playing rugby against South Africa this evening. The mother-of-two, 60, stunned as she let her hair down for the match, just days after she was all dressed up to present The Pride of Britain 2021 awards.

Taking to her Instagram, the star flaunted her ageless figure in view of her 183,000 followers.

In a series of selfies in her Welsh rugby top, Carol threw her support behind her national team.

Smiling at the camera, the star tucked her sports top into a pair of black skinny jeans which hugged her curves in all the right places.

Carol added a patent black belt which served to highlight her tiny waist.

The star wore her hair in its natural waves as it tumbled over one of her shoulders.

Putting on a glam display for her national team, Carol wore a smokey eye with lashings of eyeliner and mascara.

In the second image, the author took a picture from a different angle as she revealed her immaculately painted white nails.

The third snap showed Carol coyly grinning at her phone as she jutted her hip out to show off her curvaceous figure.

In the caption, the star revealed that she couldn’t wait to watch her beloved team play.

Carol wrote: “It’s GAME DAY …. @welshrugbyunion vs South Africa @bokke_official…..so exciting to be back in the @principalitysta later on.

“So radio show, the big game and perhaps a party,” a hopeful Carol added alongside a laughing face emoji.

“Happy days,” she signed off, along with the hashtags: “#rugby #AutumnSeries #Wales #springboks #springboksrugby.”

Yesterday Carol teased having a new “man” on the scene in an Instagram post, as she showed off a very “exciting” addition in her life.

The TV personality shared that she has a “new man” on the scene, as she uploaded photos of a grey 4×4 on her Instagram page this evening.

Carol typed: “Telling you this… I’ve now got a MAN in my life @mantruckandbus.

The star admitted to being “so excited” over the brand new ride.

Carol continued: “So lucky…..he (she) needs converting into my mobile heaven….and I’ll share it all the way….and the adventures to come…..bliss. #vanlifeuk #vanlife #campervanideas #man #adventures.”

In response, her fans said she had found her “perfect match” with the spacious mode of travel.