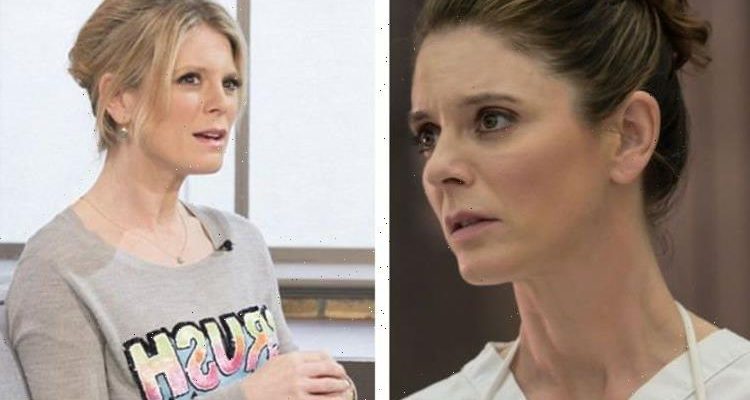 Emilia Fox, 47, is best known as everyone’s favourite pathologist on BBC’s hit crime drama Silent Witness. The show has been running since 1996 and boasting an impressive 23 series, it has gone from strength to strength and shows no signs of bowing out – thank goodness!

I can’t drink when I’m working any more, so I said, ‘Can she do something else?

The actress has starred on the programme since she was cast as Dr Nikki Alexander in 2004.

And 17 years later, she’s come to know her alter-ego so well, she can tell the Silence Witness writers what her character would do in certain situations.

In a new interview, Emilia spoke about one scene inparticular where she questioned the screen-writer’s judgement, resulting in them changing the script.

“We did a scene recently where Nikki was a bit reflective,” she said.

“They gave her a glass of wine. I didn’t think that was right.

“I can’t drink when I’m working any more, so I said, ‘Can she do something else?'”

She went on to explain to The Times why she no longer craves booze after a long day.

“When I reached my 40s, I was running between work and my daughter Rose, and I had nothing else in my life,” the TV star mused.

“I was in therapy, which has massively helped me.

“I decided getting physically fit would help my mental fitness, so I started doing cardio, HIIT work-outs and Pilates.

“And so that fed into my character, so we decided Nikki could go for a run instead!”

But while Emilia thinks much of her longtime on-screen imaginary friend, she admitted Nikki is a workaholic who should get a life.

“She’s consumed by work and a bit isolated,” she laughed.

“I love that she is a friend and an ally to me in real life.

“Seriously, she has been there for me in hard times.

“But if we were to go out for a drink together, I would tell her to get some serious therapy and look after the other bits of her life!”

Silent Witness returned to our screens on Monday, beginning with the first in a two-part episode mysteriously entitled Redemption.

Though fans might have been expecting the longest-running drama to be back on our screens sooner, the Covid pandemic meant that the January release date wasn’t possible.

But despite the lengthy setback, executive producer Jo McCellen described the upcoming series as “brilliant”.

“Series 24 is going to be brilliant and, although fans will have to wait a little while longer than usual to see it, I promise them it is worth it!” she told Radio Times.