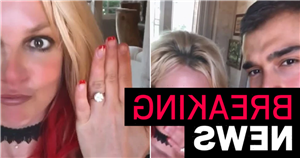 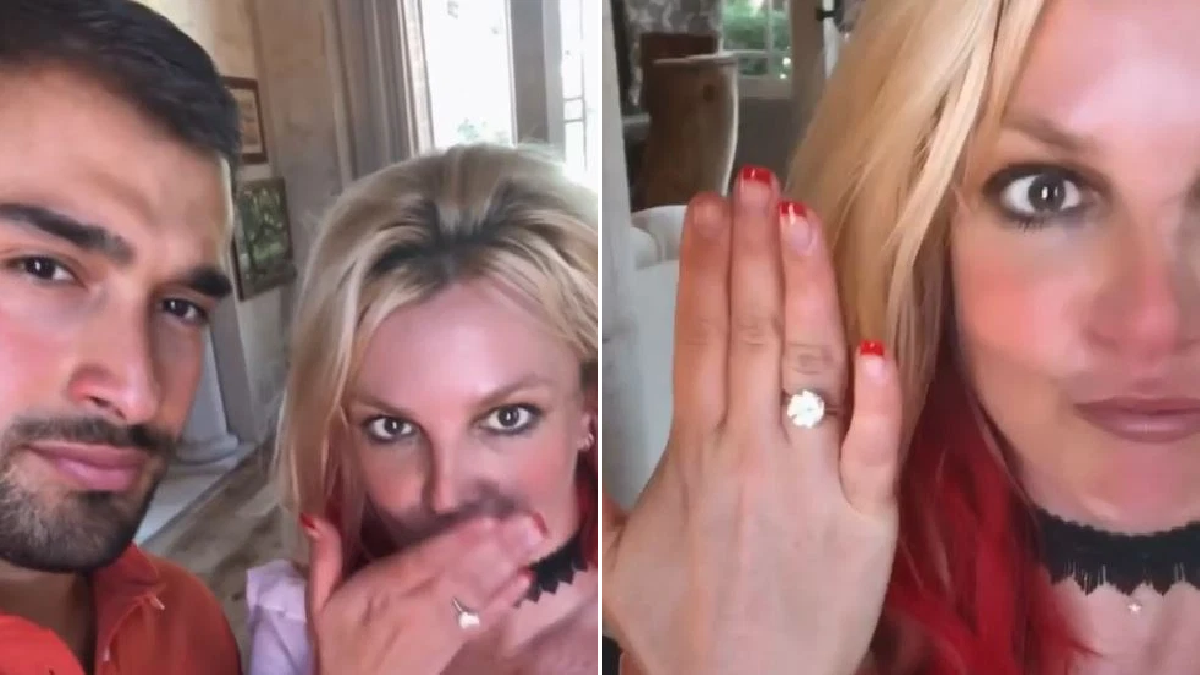 Britney Spears has revealed she is engaged to her boyfriend Sam Asghari just days after her dad filed a petition to end her conservatorship.

The 39-year-old Toxic singer announced the heartwarming news in a video shared on her Instagram page, which saw her flashing her diamond ring and posing with her other half.

‘Look at that, do you like it?’ Sam is heard telling her.

The joyous moment comes after Sam, 27, told his followers to ‘calm down’ when photos of a diamond ring appeared on his Instagram Stories on Friday and that his account had been ‘hacked’.

‘Account got hacked and was photoshopped – calm down everyone!’ he wrote at the time.

Britney and Sam met in 2016 when she hired him to appear as her love interest in her Slumber Party music video.

Sam previously told Men’s Health that the pair struck up a conversation on set, exchanged phones numbers and soon after went out on a date for sushi.

The relationship progressed, and they were pictured together just a few months later on New Year’s Eve.

On New Year’s Day 2017, Britney made things Instagram official by posting a photo of Sam putting his arm around her at dinner.

‘She motivates me more than anyone,’ he told the publication in 2018. ‘It’s crazy how I can be humbled by a person like her.

‘If I could be that humble when I’m that high in life, that would be the best thing.

‘I grew up with three sisters, and my personality is just to be a supportive person for my family and she’s family. I’m always going to support her. She is another blessing that happened to me.’

On Wednesday, Britney’s dad Jamie filed a petition to end the conservatorship that has controlled the pop superstar’s life and career since 2008.

In a stunning move, he said that ‘recent events’ called into question whether she still needed a court to oversee her affairs.

The filing at a court in Los Angeles states: ‘Ms Spears has told this Court that she wants control of her life back without the safety rails of a conservatorship.

‘She wants to be able to make decisions regarding her own medical care, deciding when, where and how often to get therapy. She wants to control the money she has made from her career and spend it without supervision or oversight.

‘She wants to be able to get married and have a baby, if she so chooses. In short, she wants to live her life as she chooses without the constraints of a conservator or court proceeding.’

Britney has twice addressed the court in recent months, describing the conservatorship as ‘abusive’ and strongly calling for her father to be removed from his role.

Lawyers for Jamie said he had always wanted what was best for his daughter.

She had previously expressed her wish to have children and marry Sam.