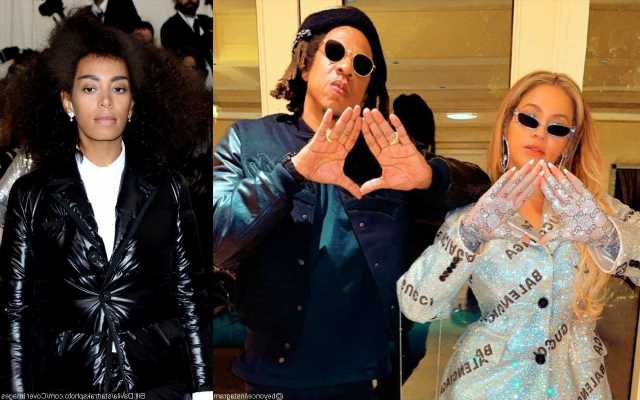 Upon the release of her long-awaited seventh studio record, the ‘Formation’ singer has also been speculated to have made a reference to her husband’s infamous lift fight with her sister Solange.

AceShowbiz –Beyonce Knowles has apparently hinted at Jay-Z‘s cheating scandal and his infamous lift fight with her sister Solange Knowles in her new album. At midnight on Thursday, July 28, the “Formation” singer released her long-awaited seventh studio record “Renaissance” after it was leaked two days earlier.

Fans and critics said Beyonce seemed to reference her 21-year relationship with rapper Jay-Z as she admitted “nobody’s perfect” and they “don’t need the world’s acceptance.”

The 40-year-old singer first spoke publicly about her husband’s infidelity in her 2016 visual album “Lemonade”, famously branding the other woman “Becky with the good hair.” A year later Jay-Z referenced the scandal, claiming he had “gone into survival mode” and “shut down emotionally,” resulting in him cheating.

Beyonce, however, appeared to use her new record to share her confidence he won’t go behind her back again. She sings, “I’m one of one, I’m number one, I’m the only one/ Don’t even waste your time trying to compete with me/ No one else in this world can think like me/ I’m twisted, contradicted, keep him addicted.”

Referencing the 2014 incident when her sister Solange was filmed attacking Jay-Z in an elevator at the Met Gala, Beyonce sings on her new “Cozy” tune, “She’s a god, she’s a hero, she survived, all she been through, confident and she lethal/ Might I suggest you don’t f*** with my sis, because she comfortable/ Comfortable in my skin, cozy with who I am.”

At the time of Solange’s beating, Beyonce and Jay-Z released a joint statement, saying it was a “private family matter.” Yet, the singer used a remix of her “Flawless” single to say, “And we could go around and get some good karma, but no/ We escalate, up in this b*** like elevators/ Of course sometimes s** go down, when it’s a billion dollars on an elevator.”