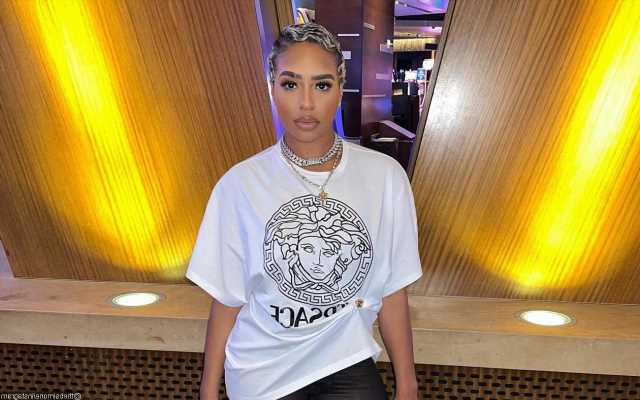 Making use of her Instagram account, the femcee calls out people who took pictures of her when she ran from gunfire which took place at MacArthur Center on April 2.

AceShowbiz –B. Simone just came out from a scary experience when she was caught in a shooting incident at MacArthur Center on Saturday, April 2. While it was fortunate enough that the femcee was unharmed during the ordeal, which reportedly killed one woman, some people seemingly made light of it by sharing a picture of the femcee hiding during the incident.

“And guess who locked in the back of H&M with me,” one person captioned a Facebook post featuring an image of rapper. “B Simone [face palm emoji] I swear I bet she don’t wanna come back to Norfolk anymore…. cousin [redacted name] got a good snap shot for us lol yeah he back here too [face palm emoji].”

B. Simone quickly called out people  who took pictures of her when she ran from gunfire. “The fact that people think it’s okay and ‘normal’ to take pictures of you and post without asking is mind blowing [face palm emoji],” she wrote on Instagram Story on Monday, April 4.

“Sneaky ****…. We literally running for our lives running from bullets and someone goes ‘are you B.Simone can we take a pic’… that’s weird AF,” she went on to say.

In a separate post, B. Simone reposted someone else’s message that read, “Whoever took that pic of B when we were all hiding in a stock room after literally running for our lives is nasty. That’s some sick **** for real.”

Most fans agreed with B. Simone with one writing in a comment, “The world is becoming more desensitized day but day.” Also criticizing the people who took B. Simone’s pictures despite the situation, one other fan added, “Very weird behavior. That’s what’s on your mind when running from a shooter is taking a pic of a celebrity?”

“That is weird. We bout to possibly die & you like ‘oh look I almost died with B.Simone’,” someone else echoed the sentiment. “It’s really weird people do anything for clout,” another user wrote.