To make natural dye from avocados, all you need are the pits. Those golden-brown seeds, so slippery when first removed, contain a milky, tannin-rich liquid that blooms into a startling red ink when simmered in water.

First, wash the pits and dry them. Then, boil them in a pot filled with enough water to cover the fabric (about five pits per half-pound of fabric). As the seeds dance around the liquid, slowly knocking into each other, their shells will peel off and crack open, turning the water a bright ruby red. Let it steep overnight.

The next day, add damp fabric until the color looks right. (Any pre-washed fabrics should be soaked in warm water the previous night so the color takes.) Don’t strive for perfection: Each attempt will be different, imperfect, otherworldly and pink. 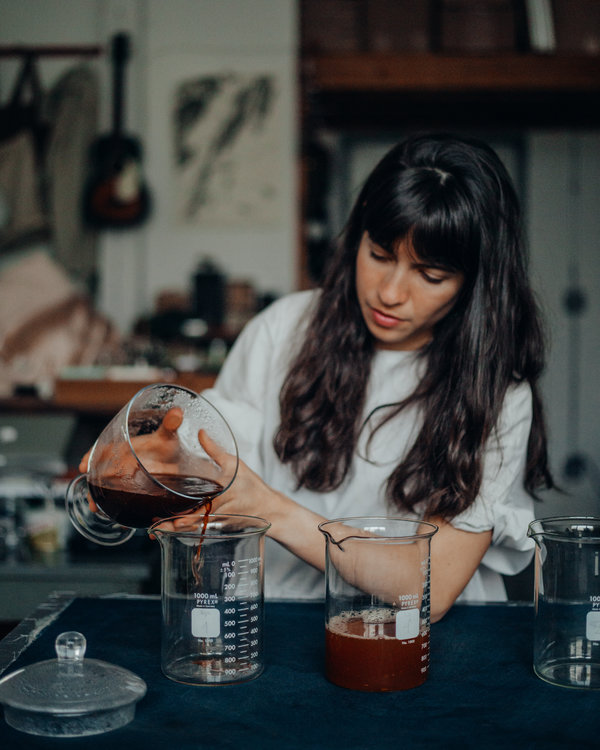 This deceptively simple process is an art form in the hands of María Elena Pombo. A clothing designer from Venezuela, Ms. Pombo, 30, is part of a group of millennial makers who work with plant-based dyes, which tend to be more sustainable and make use of vegetable scraps that might otherwise be abandoned. From her studio, on an industrial stretch of Ingraham Street in Brooklyn’s East Williamsburg neighborhood, Ms. Pombo creates exquisite made-to-order clothing dyed with all kinds of organic refuse, including walnut shells, annatto seeds and onion skins. But avocado pits are her main medium.

Her company, Fragmentario, is equal parts fashion experiment and educational initiative. In addition to selling clothing, Ms. Pombo offers workshops on how to extract beguiling colors from botanical materials.

The results are uneven by nature. Variations in water minerality and pH, not to mention the inevitable addition of pollutants, affect the shades of plant-based dyes. Hard water, which is full of minerals like calcium and magnesium, can make colors more vibrant, while softer water produces more muted tones. Plant-based fibers like cotton or linen will typically mellow the dye, while animal-derived fibers like wool or silk yield richer hues.

But Ms. Pombo approaches her pigments with a methodical sensibility that reflects her earlier training in engineering. There are beakers, burners and tongs, and jars filled with water sourced from all over the world in her studio, along with meticulous spreadsheets that trace dye experiments and tests. “I’m doing this hand process but it’s very controlled,” she said.

We can thank giant prehistoric sloths for the dispersal of avocados. The Lestodons, as the sloths are known, could grow to be 15 feet long, and they spent their days roaming around South America during the Cenozoic era, swallowing avocados whole and spreading fruit trees in their wake. Though humans began cultivating the fruit as early as 5,000 years ago, one of the earliest published descriptions of the avocado is from 1519: The “edible fruit,” wrote the geographer and conquistador Martin Fernandez de Enciso in a document called Suma de geographia, is “like butter” and “of marvelous flavor, so good and pleasing to the palate that it is a marvelous thing.”

The seeds understandably play second fiddle to this “marvelous” fruit — now so in-demand that the United States imported nearly 2 billion pounds of Hass avocados from Mexico in 2018 alone. But there is evidence the humble pit has long been used for dye or ink. In a paper published in 1964, a Spanish art historian, Santiago Sebastian, wrote that many surviving documents from the Spanish conquest of Central and South America were reportedly written using ink derived from the seeds. And its application to textiles goes back generations, though it is often not preserved in the written record.

“Avocado pink is a bit of a mystery,” said Jennifer Gómez Menjívar, an associate professor of Spanish and Latin American studies at the University of Minnesota, Duluth. “What we know about it has been preserved through oral histories.” For example, the Kuna people who have lived in northeastern Panama and the neighboring San Blas Islands since pre-Hispanic times, mention the use of avocado to dye fabrics in their creation story. But traces of alpaca and llama wool dyed with avocado seeds have been unearthed in archaeological sites as well, notably in the Andean highlands where the Aymara and Quechua people have resided for millions of years.

Unlike dyes made of onion skins or flowers — where the end product often closely resembles the color of the material — the dye of avocado seeds is “very magical,” Ms. Pombo said. “I would never have imagined that it was going to be pink.”

There are many types of avocados, and thus, many possible shades of avocado pink; the species, part of the laurel family, is generally divided into three botanical races — Mexican, Guatemalan and West Indian — but cross-pollination permits the development of unlimited varieties.

The variety that grew in Ms. Pombo’s yard in her family home in Caracas, called Fuerte, is green-skinned, pear-shaped and double the size of the Hass variety commonly found in the U.S. The seed announces itself when ripe, rattling in the groove inside the fruit like a maraca. Those avocados, Ms. Pombo said, “remind me of home.”

But for her first avocado-dyed clothing collection she used Hass avocado seeds, sourcing them from four different delis in Bushwick. Because storage space at the delis was limited, this meant shuttling to each location twice a week, to pick up around 20 pits each time. It also meant hours spent catching up with the owners and employees when Ms. Pombo dropped in for a pickup.

The outcome was a line of uniform garments, available in linen, silk or a sheer silk-organza-and-cotton blend, that were hand-dyed — down to the button — in a dusty pink shade that calls to mind a bone-dry rose. The garments, which were sold through Instagram, didn’t come cheap: Prices ranged from $300 for a linen shirt and $1,580 for a silk shantung jacket. But Ms. Pombo said that the carefully fabricated pieces are meant to be heirloom items — unique and inheritable. “The idea is to slow down and have a more thoughtful relationship with what we’re consuming,” she said.

Last summer at one of Ms. Pombo’s onion-dyeing workshop, held at McLeod’s Community Garden in Brownsville, Brooklyn, (and offered free-of-charge through a grant from the New York Restoration Project) nearly 50 participants gathered around bins full of waterlogged onion skins, waiting for their turn to dunk scarves and bandannas. Bits of detritus mingled with the fabric as it soaked, imbuing the charmeuse and chiffon with a rusty red hue.

While participants waited patiently for the alchemy to take effect, Ms. Pombo spoke about the beauty that could be wrung from food waste.

“We ask a lot of questions about where our food comes from, but we do not think the same about textiles,” Ms. Pombo said. “By using food waste, you give them a second life, creating beauty of something that would be considered garbage.” (Ms. Pombo now sources her seeds from Arepera Guacuco, a Venezuelan restaurant in Brooklyn. Every week the restaurant fills up a gallon-size Mason jar with about a 100 pits for her use; she grinds most of them with a Vitamix for easier storage.)

Her maternal grandmother, Ligia de Reyes, was sitting in a white plastic patio chair nearby, beaming with pride. Ms. Reyes, who is 80, was visiting Brooklyn from Cabimas, Venezuela, for the first time. Her family left Venezuela slowly, but is now mostly displaced from the country, which is mired in severe economic collapse and devastation.

“I didn’t know how to have this kind of fragmented family structure,” Ms. Pombo said. Her parents are in Canada and her brother lives in London. But both her grandmothers remain in Venezuela. “Nostalgia is such a part of my identity now because it’s not like I can just “go back home,” she said. “What remains is a shell of what it was once.”

In 2018, Ms. Pombo became eligible to apply for a green card, which meant that she couldn’t leave the U.S. at all. It was a hard change; the avocado seed workshops had taken her to Italy, Spain and Germany, where she taught workshops; each city produced a unique shade of “avocado pink” from the different water properties and dye-making conditions. (The water in Barcelona and Madrid resulted in more reddish colors, but it was Paris’ hard water that yielded the most extreme pink.)

Realizing she wouldn’t be able to travel for a while, Ms. Pombo began asking friends to send her water from their journeys. Strangers and fans on social media followed suit. Bottles began arriving from Chicago, New Delhi and interesting sources, like the Dead Sea. “Getting those waters from people, that was really beautiful,” Ms. Pombo recalled, visibly moved. Being stuck in New York helped her find a new way to connect with the world. A second clothing line started to take shape. “Everyone has been a part of the collection,” she said. “It inspired a practice for what the color could be like, a sense of playfulness.”

The new pieces, all silk and made-to-order, range from $300 for a scarf to $2,200 for a hand-pleated silk organza dress. The silhouettes are similar to her last collection, but this time the diaphanous textiles are ruched and steamed before dyeing, and the shades vacillate between tones of blush, rust and rose. The results looks wild, unwieldy and unpredictable, reflecting the variability of different water samples from around the world.

One of her best friends from Venezuela grounded in San Luis Potosi, Mexico, because her passport had expired and Venezuela has not issued her a new one, was for a long time unable to visit New York. She mailed Ms. Pombo the water she collected from Mexico anyway. “It’s nice,” Ms. Pombo said. “Because we did this together, but away.”