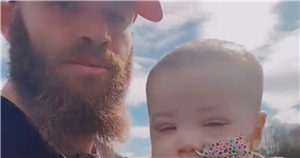 Ashley Cain has revealed he's been able to enjoy a walk down the street with daughter Azaylia for the first time ever.

The doting dad, who previously shared a heartbreaking picture with his baby, also updated his fans on Azaylia's condition after she was rushed back into hospital on Monday night.

As he held her in his arms, the 30 year old began: "Hey guys, you alright? So we've just got back from hospital, we had to go in for a platelet transfusion for Azaylia.

"As you can see on her face now, she's not only giving nose bleeds but when she's crying, her tears are blood as well. "So scary. We took her in for a platelet transfusion to try and help her blood clot a bit more, to prevent bleeding."

The former Ex On The Beach star went on to share that it was the first time he was able to take Azaylia for a stroll since she was born.

He continued: "But this is mad yeah, I've never, ever been able to do this. Walk outside in the street with my baby girl.

"When she was going through chemo before and transplants, she had to be covered up, so the fact I get to walk outside with my baby in my arms and get some fresh air, it's absolutely amazing." Ashley then proceeded to say, "Let's go champ" as he kissed her on her head and told her how much he loved her.

Speaking with his followers further, he added: "It seems mad, I've had Azaylia for eight months and I've never been able to walk down the street with her, holding her in my arms.

"And that's why, despite what we're going through, everyday is a blessing and I say that from the bottom of my heart and with the most truth possible.

"Things like this today, absolutely amazing. Something so small means so much, and it's all because of this little one."

The reality star, who recieved a heartfelt message from Dwayne Johnson, previously shared a tender video of his baby Azaylia sleeping and said she was continuing to fight despite doctors saying she may only have days to live.

He expressed: "We fight and pray for another day #LetsGoChamp".